Blunting The Islamification Of Christianity

The New York Times on Saturday's Vatican meeting between Benedict XVI and the Archbishop of Canterbury, Rowan Williams:

[Williams]...questioned why the longstanding dialogue between the religions had foundered over the question of female clergy.

Here's why, your Grace. The pope's brazen move to convert British Anglican priests who oppose female bishops is an obvious sign that he considers the Roman Catholic Church's misogynist ecclesiology to be its leading missionary edge. Because it marginalizes women to say they shouldn't be bishops or priests (or pastors, as most U.S. evangelical Protestants still do). It devalues women to say that they aren't pure enough to do sacramental work. It insults women to claim that they are a lessor order of humanity, as Gen. 2 seems to teach, though Gen. 1:27 does not (which notion of creation have you been taught and do you prefer -- woman made as an afterthought from man's rib or male and female created simultaneously in God's image?). It cuts women off from the grace of God itself to say that God and our LORD Jesus Christ view them as less worthy to preach and teach and bless and absolve in their holy names. 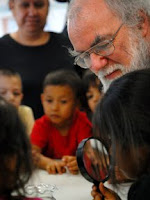 but my guess is that, deep down, it doesn't make complete sense even to young American Roman Catholics, both male and female. And it no longer makes sense to most in the Episcopal Church, which has had female priests since the 1970s and now has a female presiding bishop, nor to ++Rowan, who favors the British Anglican church eventually ordaining women as bishops.

So how long are we reportedly besieged, marginal, so-called progressive Christians -- especially those who believe that Jesus Christ's radical and reckless love extends to male and female followers, apostles, and priests in precisely equal, which is to say infinite, measure -- going to continue acting so defensive? How long are we going to let Christians whose view of women tends to mirror Islam's have the upper hand in the church and especially in the news media, which largely dictate how secular society views people of faith?

Precisely as long as we continue to let our critics get away with pretending the great debate is about something else entirely. So-called orthodox conservatives like to say the church is mainly having an argument about the authority of scripture and the role of gay and lesbian people. It behooves them to do so to distract the attention of the half of the human race about whom Christendom is truly convulsed. Will or will not the relatively small minority of Christians who are absolutely right on this issue finally be able to stand up for women and blunt the Islamification of Christianity?
By Fr. John at 1:49 PM