Truly Getting Acquainted In The Middle East 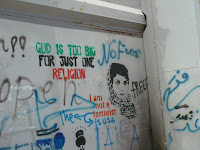 Hussein Agha and Robert Malley, in the Dec. 3 "New York Review of Books," argue that the current generation of Palestinians is by and large unwilling to recognize Israel's right to exist even on part of its land, whereas most Israelis won't recognize their nation's role in causing the historic plight of the Palestinian people. This is why a comprehensive peace has been out of reach, not the shortcomings of particular leaders at particular times nor the failings of successive U.S. administrations. Agha and Malley do say that the Obama administration has been inept:

In this last respect, Obama is only the latest in a string of American presidents who have shown few limits to the harm they can inflict on those Palestinians they purport to strengthen. By twice twisting Abbas's arm, first to attend a meeting with Netanyahu and then to withdraw the Goldstone report, the administration unwittingly hurt him more in the space of two weeks than its predecessor had done in as many terms. The US hope was to tame Netanyahu, empower Abbas, motivate peace advocates, curtail extremists, and energize negotiations. So far, it has accomplished the precise opposite.

The article was filed on Nov. 3, three days before the Palestinian president said that he wouldn't seek reelection, a development which obviously bolstered the authors' argument -- not that they think a more deft, experienced U.S. administration could ever do much better in view of the two sides' failure to move on the first principles of Israel's right to exist and Palestinians' right to have their grievances addressed. Instead, Agha and Malley favor "a long-term interim arrangement" which would create a de facto Palestinian state (possibly in confederation with Jordan, which could take a lead role in providing security) without resolving the other issues that are usually envisioned as being necessary for a comprehensive deal:

Israel would withdraw from all or part of the West Bank, diminishing friction between the two peoples. Security arrangements would be put in place. More vexing questions, including final boundaries, the fate of refugees and of Jerusalem's holy sites as well as Palestinian recognition of a Jewish state, for now put on a slow track, would be taken up only after both peoples had grown accustomed to their new interaction.

By lowering the bar, the proposal would lower the stakes, preserving Israeli and Palestinian aspirations while defusing the conflict's more volatile aspects. Should Palestinians feel more secure and prosperous and Israelis feel safer, the constituencies backing renewed confrontation might shrink. Unlike Oslo's lofty dreams, an interim arrangement would more authentically reflect the two sides' feelings: begrudging mutual acquiescence as opposed to earnest acceptance.