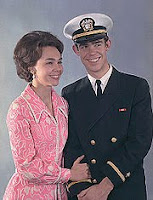 I guess I'm the last Creedence Clearwater Revival fan in the world to know that John Forgerty's song "Fortunate Son" was written about a member of the Nixon family:

Some folks inherit star spangled eyes,
Ooh, they send you down to war, Lord,
And when you ask them, "How much should we give?"
Ooh, they only answer More! more! more!

Mr. Reilly meant Julie. As for Eisenhower, he served in the Naval Reserve during the Vietnam war. I naturally assumed that Fogerty had served in a riskier capacity. But it turns out he was pretty fortunate, too. To avoid being drafted, he joined the Army Reserve and never left U.S. soil during his stint.
By Fr. John at 10:47 PM