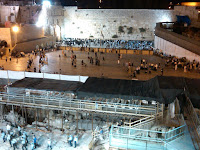 Daniel Levin summarizes Muslim ideologues' claims that there was never a Jewish temple in Jerusalem, part and parcel of some Palestinians' refusal to acknowledge that Israel is a Jewish state.

You and I both know the temple was there. But politics has its own imperatives. If the Muslim revisionists are serious about proving their point, the obvious solution is internationally supervised archaeological digs under the Temple Mount, but it's hard to imagine them being authorized by the custodians of the Al-Aqsa mosque, Dome of the Rock, and other more recent (aka 1300 years old) arrivals to the neighborhood. They should dig up or shut up.

Ironic that Palestinians are playing me-first just as we learn that most of them have Jewish ancestors. Besides, the more elegant argument is the one we St. John's pilgrims heard from a Palestinian scholar during our August pilgrimage: That Palestine's indigenous people, the Canaanites, were worshiping in Jerusalem long before Jews arrived and built their temples. None of which helps Israel and Palestinians live in peace today.