Forgive Me, Father, For We Have Blogged 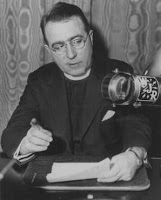 Focus groups interviewed by Democracy Corps, founded by Clinton ex-staffers James Carville and Stanley Greenberg, show that the mainstream media err in assuming that conservative Republicans are motivated by something so prosaic as racial bias:

[T]hese conservative Republican voters believe Obama is deliberately and ruthlessly advancing a ‘secret agenda’ to bankrupt our country and dramatically expand government control over all aspects of our daily lives. They view this effort in sweeping terms, and cast a successful Obama presidency as the destruction of the United States as it was conceived by our founders and developed over the past 200 years.

And yet reading the data, Andrew Sullivan insists that these conservative voters think Obama's rise "has something to do with black community organizations and Jewish money." Sullivan calls it "the return of Coughlinism," a reference to the anti-Semitic radio preacher, Fr. Charles Coughlin. Interesting that Carville and Greenberg minimize racism as a factor:

[T]he press and elites continue to look for a racial element that drives these voters’ beliefs – but they need to get over it.

Only to have Sullivan drag bigotry back in, and with an incendiary reference to Fr. Coughlin, just because one Republican with an active imagination mentioned ACORN and George Soros. That overreaching aside, I think Sullivan is right that the harshness of the conservatives' critique risks driving fiscally conservative but less paranoid independents into the Democrats' camp. I also agree that if the angriest, most frightened voters continue to dominate the party, Gov. Palin will be the 2012 nominee. The hope for a saner GOP: That she really loses big.
By Fr. John at 4:07 PM

Yes, I agree, no good historian (not his profession, of course) would have come to the conclusion that Sullivan did on that point, based on one or a few quotes. I think racism simply is going to be difficult for historians to sort through on this issue. I believe the number of racists in the country is decreasing and will continue to decrease. Obama's election showed that. But I also think that racism has come to be regarded as such a negative in this country, one has to take into account that even for those dwindling number who are ractists, it is hard to get them to admit that race affects their views. The Democracy Corps findings are interesting in that they suggest its less of a factor than some liberal pundits have assumed it is.

The recent NFL team bid kerfuffle could have been opportunity to open up discussion of how people look at things, why preceptionsarise -- something to build on after the Gates-Crowley flap. That didn't happen, unfortunately. at The Corner or at other sites at which I looked. Sometimes these things run along pretty well worn tracks.

Instead of the op ed that he ran in the WSJ, here's the op ed I would have published had I been Limbaugh:

"Chill everybody. To my supporters, let's keep this in perspective. Pick up a newspaper and you’ll see people with real problems, in the rest of the world and even here in this great country. I mean, c’mon, think of Darfur. Think of Bosnia ten years ago. Think of tribal warfare, ethnic cleansing, genocide. Think of oppressed people in totalitarian countries. It's embarrassing to me to have people try to paint me as some type of huge martyr when innocent people have suffered and are suffering throughout the world for nothing more than the color of their skin, their tribe, their gender. I’m not in that position.

You know what? I can deal. I have a style, a shtick, that I’ve chosen – no one forced me to use it -- and I understand and accept that it appeals to some people and not to others. If I advocate personal responsibility, I have to man up to how I come across. Don't make it seem as if my choices have played no part at all in crafting my image overall.

Yes, there are aspects of this deal which I wish had gone differently. I wish people wouldn’t have made up some quotes I never said. Yeah, that stinks. I’m shocked and disappointed but let’s keep it in perspective. Look at the glass half full, not half empty. I’m an extraordinarily lucky guy in comparison to so many other people and I thank God for my blessings. I can deal with the libel issues as my lawyer advises. And to those I have yet to convince that I’m better than you assumed, I won’t hide behind blame games. We see too much of that as it is, we need better models. I promise you I won’t shy away from digging deep inside me and giving some serious thought to why people were willing to believe some racist quotes about slavery and about James Earl Ray that I never said.

That might have triggered some interesting conversations! What I saw on newspaper message boards turned out to be pretty formulaic, with conservatives and liberals largely making the same stale arguments that are repeated any time racism is mentioned.

As to Sullivan, he posts interesting essays on some issues but, as you've pointed out, sometimes slips.

More grist for our third party! Like Trader Joe's, it will stand for the over-educated and underemployed.