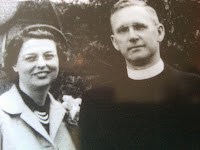 "There goes the dropout." A teenager named Ernest Sillers heard those harsh words one day in 1929 as he walked past the manager's office at the Pasadena Bank of America branch where he was working as a clerk. After making a minor grammatical error on a form, Ern had confessed to his boss that he'd left high school in Nova Scotia after his freshman year. A two-week visit to his sister in sunny California had turned into a seemingly indefinite stay -- until he heard the tone in the manager's voice and decided to go home and back to school.

As Lisa Merryman writes in Ernest Sillers: Story of a Visionary, Ern got more constructive and no less fateful advice during the final leg of his long trip home to Nova Scotia. The well-dressed stranger who invited him to sit at his table in the crowded dining car turned out to be the Very Rev. John P. Derwent Llywd, dean of the Anglican cathedral in Halifax. By the next morning, Derwent Llywd had persuaded Ern to dedicate his life to God and his church.

At Fr. Ern's funeral service this morning at St. Margaret's Episcopal Church in San Juan Capistrano, one of his eulogists, longtime friend John Milam, told this story to help hundreds of us mourners understand why his daily prayer is "God Bless Dean John."

Canon Sillers' life was an ecclesiastical triptych -- six years as a Baptist minister, then an Episcopal parish priest until retiring (so to speak) at 70, and finally a third career as school builder and church planter. Merryman writes that Sillers, renowned for his gifts as preacher, teacher, and fundraiser, convened the first planning meeting for St. Margaret's Church and School in 1979 at El Adobe near Mission San Juan Capistrano, one of President Nixon's favorite restaurants (thus do my worlds persist in conjoining). He launched three other southern California institutions, including our own St. John's Episcopal Church and School in Rancho Santa Margarita, where a number of his initial collaborators are still joyously at work, including business manager Chris Connally, director of admissions Noreen Cohen, elementary school principal Melissa Christian, 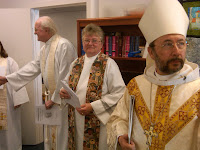 and superintendent of buildings and grounds Fernando Pedraza, whose father once worked at St. Margaret's. Fernando (who now reports to St. John's Headmaster James Lusby, in his 13th year at the helm) was tapped this morning to be a pallbearer.

As St. John's Church's new vicar several years ago, I had the pleasure of a long lunch with our founding headmaster, who used the opportunity to sketch out his latest project, a teacher's college, on a napkin and asked me to let him know when ("if" was not an Ern word) the names of any potential capital contributors occurred to me. He was then 95. He died on Oct. 15, a fortnight after his 99th birthday and a couple of days after Joan Haneishi, a member of our church and a former colleague of Fr. Ern at St. Mary and All Angels School in Aliso Viejo, which he also founded, had visited him in the hospital. Joan told me that she squeezed both his hands and, beginning with a quotation from Jesus, told the great man, "'I am the vine, and you are the branches,' and these branches have borne much fruit."

At today's funeral, during which the Rt. Rev. Sergio Carranza, assisting bishop in the Diocese of Los Angeles, was celebrant, no one was willing to guess the number of tender branches into which Fr. Ern had settled diplomas over the years, the number of boys and girls who have gotten academically

rigorous, theologically expansive, and values-intensive Episcopal educations thanks to one faithful man's vision and energy. Certainly the 40 children in the four-school choir this morning, including these four from St. John's, will someday have good cause to say their own prayers of thanksgiving for Fr. Ern.

As for some of the grownup ministers of Fr. Ern's funeral service, Bishop Carranza is shown above with the Rev. Elizabeth Habecker, rector of St. Mark's Church in Downey, California (where Sillers also established a school) and the Rev. Doran Tregarthen, who said in a brief, powerful eulogy that Fr. Ern, on gaining heaven, had no doubt gone looking for God, his beloved wife of 70 years, Aldine, who died in 2004, and a school to found, although Fr. Doran was not entirely sure in which order these actions would have occurred.
By Fr. John at 5:40 PM

A lovely tribute. Wish I'd known him.