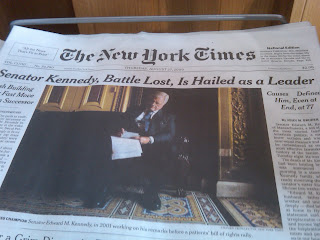 George Will turns a nice phrase about Sen. Kennedy:

In the Senate, as elsewhere, 80 percent of the important work is done by a talented 20 percent. And 95 percent of the work is done off the floor, away from committees, out of sight, where strong convictions leavened by good humor are the currency of accomplishment. There Ted Kennedy, who had the politics of the Boston Irish in his chromosomes, flourished.

Since I read newspapers on-line (and on-Kindle, where I proudly pay for content), I rarely see the marvelous way great papers still express themselves in page layout and headlines. Here in a Starbucks in San Diego, I caught a glimpse of a grandiloquent banner headline in the New York Times: "Senator Kennedy, Battle Lost, Is Hailed as a Leader."

I wonder who wrote that: A baby boomer authentically mourning the end of an era, or a younger editor who had gotten himself or herself into the spirit of the moment. While the "battle lost" bit is elevating, it's a battle many of us will join as well. I'm in San Diego to conduct a committal service for a less-well-known man who battled cancer no less bravely, as millions do and shall. So perhaps that element could have been skipped, at least in the headline.

As for Kennedy as a great leader, all notable people should be given their due in the wake of their deaths, as the Boston Globe's Jeff Jacoby does. But Jacoby's summary of Kennedy's foreign policy legacy is startling:

Abroad, he failed to take seriously the stakes in the Cold War. “Today, with the exception of East Germany, Russia has no more satellites,’’ he wrote in 1968, the year Soviet tanks invaded Czechoslovakia. He hailed Leonid Brezhnev, the Soviet dictator, as “a warm individual . . . completely committed to peace.’’ He fought to cut off aid to South Vietnam and Cambodia in 1975 - aid that might have prevented a communist bloodbath. In recent years he was willing to consign millions to Saddam Hussein’s tyranny, opposing not only the 2003 liberation of Iraq but even the 1991 campaign to undo the occupation of Kuwait.

On domestic affairs, Kennedy used most of his influence promoting ways to spend other people's money. While Kennedy has been hailed this week for his courage, in politics, being a big spender is courageous only to the extent of sometimes exposing one to being voted out of office, which would have caused no meals to be missed in Kennedy's household.

As for the issue with which he is most closely associated, in 1971 he missed a chance to provide health insurance to virtually all Americans when he opposed President Nixon's national health insurance plan. His subsequent efforts amounted to de facto acts of expiation for failing as a young man to exhibit the bipartisan temperament for which he being so fulsomely if selectively praised today. The thing is, 38 years ago, he actually could've pulled it off. So whose fault is it that 43 million Americans remain uninsured?