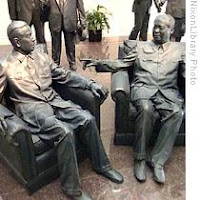 Commentators on the Youpai Forum complain on moral grounds about the statues of Mao Zedong and Zhou Enlai on display at the Nixon Library in Yorba Linda. (More commentary here.) These Chinese communist leaders, they write, were responsible for the deaths of tens of millions. The writers don't say why they think bad people shouldn't be depicted three-dimensionally as opposed to in photographs and text, since I assume the bloggers don't want all references to Mao and Zhou in the museum expunged.

It may be that the critics, who are asking federal Library director Tim Naftali to remove the statues, are mistaking an exhibit for a memorial. As the Nixon aide (later, private Nixon Library director) who supervised the design of the display in which the statues appear, I can say with absolute confidence that they weren't intended to honor anyone. We asked President Nixon to pick the ten leaders he'd met who'd had the most decisive impact on the postwar world. Four of his choices were leaders of communist regimes -- the two Chinese plus Soviet leaders Leonid Brezhnev and Nikita Khrushchev. The idea was to give visitors an idea of what they looked like and illustrate RN's proposition that the U.S. could be a force for stability and constructive change by finding ways to be in dialog even with leaders of unfriendly or unsavory powers.

Nixon would have been the first to say that the Chinese regime was odious. He dedicated much of his career to opposing communism. And yet there's considerable evidence that his overtures and policies were good for the Chinese and Soviet peoples, in the same way that the North Koreans and Iranians might end up being better off if relations with the U.S. improved. While Library officials may well decide to replace the whole exhibit one day, Soviet- and PRC-style airbrushing of the politically incorrect or even morally repugnant is a terrible and an anti-historical idea.
By Fr. John at 8:05 PM