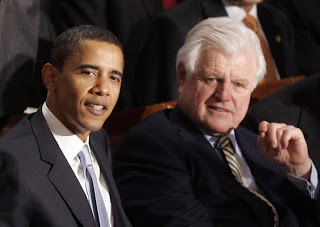 Three beautiful eulogies for Sen. Kennedy today, by sons Ted, Patrick, and (in a different sense) Barack. The President's critics should note that he spoke gracefully and without a TelePrompTer. The theme of suffering lay at the heart of his remarks:

Through his own suffering, Ted Kennedy became more alive to the plight and suffering of others — the sick child who could not see a doctor; the young soldier sent to battle without armor; the citizen denied her rights because of what she looks like or who she loves or where she comes from. The landmark laws that he championed -- the Civil Rights Act, the Americans with Disabilities Act, immigration reform, children’s health care, the Family and Medical Leave Act –all have a running thread. Ted Kennedy’s life’s work was not to champion those with wealth or power or special connections. It was to give a voice to those who were not heard; to add a rung to the ladder of opportunity; to make real the dream of our founding. He was given the gift of time that his brothers were not, and he used that gift to touch as many lives and right as many wrongs as the years would allow.

Was Obama referring just to our societal sins or to Kennedy's as well? Melissa Lafsky had the honesty if the poor taste to write about the catalyst of Kennedy's self-empowerment. Weren't all those great initiatives worth one accidental drowning, she suggests? It still surprises me that he got the chance to try. Mark Steyn describes the British way of atonement for disgraced politicians:

Six years before Chappaquiddick, in the wake of Britain’s comparatively very minor “Profumo scandal,” the eponymous John Profumo, Her Majesty’s Secretary of State for War, resigned from the House of Commons and the Queen’s Privy Council, and disappeared amid the tenements of the East End to do good works washing dishes and helping with children’s playgroups, in anonymity, for the last 40 years of his life. With the exception of one newspaper article to mark the centenary of his charitable mission, he never uttered another word in public again.

While in British politics, redemption is generally much harder to come by, plenty of Americans have gotten the Profumo treatment. Richard Nixon of course comes to mind. One may wonder whether Kennedy could have roared back so effectively as a conservative, Vietnam- and Iraq-supporting, tax-cutting, anti-illegal immigration lion of the Senate. But Americans can be equal opportunity Puritans. Kennedy's former liberal Senate colleague John Edwards, despite his lessor transgressions, would at this point in his career probably have trouble getting Profumo's children's playgroup gig.

In the end, politics, like life, is all about the story, and Ted Kennedy's was irresistible. The college-cheating, adulterous son survives the violent deaths of three seemingly worthier brothers. His family's influence and Americans' sadness over his family's serial tragedies enable him to survive his worst crisis. He grows into a loving father, uncle, and patriarch and is transfigured by the love of a good woman from Louisiana. That he writes 300 bills liberal commentators and biographers love doesn't hurt. His greatest gift to us may be that he so obviously enjoyed the life God gave him and showed how to earn the devotion of those closest to him, who, after all, knew him best. Anyway, aren't we supposed to party whenever the Prodigal returns? We each are he often enough.