Baby Steps To The Promised Land 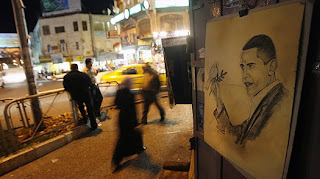 Veteran foreign affairs watcher Jim Hoagland, trying to decide whether President Obama is canny or merely weak, assesses the lack of progress so far in the Middle East:

Obama has also left some Arab leaders with whom he recently met confused and doubtful about his intentions on Middle East peace. They have reported to aides that the president acknowledged that he has failed thus far to secure matching concessions from Arab countries and Israel as the basis for new negotiations.

The Arabs complain that they have been offered no tangible incentives to move toward normalizing relations with Israel before an Israeli-Palestinian deal is reached. They dismiss both Obama's publicly undisclosed demand for a one-year freeze on Israeli settlements and Prime Minister Binyamin Netanyahu's counteroffer of a six-month freeze as equally meaningless.

"Incrementalism and the step-by-step approach has not, and we believe will not, achieve peace," Saudi Foreign Minister Saud al-Faisal told reporters in Washington on July 31. The comments by Saud, who did not see Obama, echoed the broad Arab consensus that Obama has not been bold enough. "Temporary security, confidence-building measures will also not bring peace," the Saudi prince added.

I don't understand how anything but incrementalism will work in the Middle East, as long as it is moving the right direction. What do Arab leaders expect from Obama? Israel is a sovereign democracy that can be pressured but not forced to stop West Bank and east Jerusalem settlements. Do they want the U.S. to punish Israel by slashing its aid budget, which runs around $3 billion a year? Hard to imagine how that would work at home politically unless we cut authoritarian Egypt's $1.7 billion take as well.

Beyond that, Obama doesn't have many cards to play. He took a courageous risk by going to work on the Middle East so early in his Presidency. Responsible conversation partners in the region might want to return the favor by joining him on the path to peace, baby steps and all. If they don't, he's entitled to wonder how much they really want his initiative to succeed. It's also worth noting that when Bill Clinton brokered a bold, comprehensive peace deal in 2000, it was Yasser Arafat who blinked.