The Shepherd Of Episcopalians 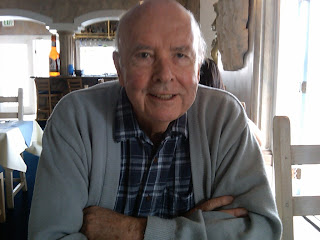 Before leaving this morning for one of my periodic lunches with church historian Charles Frazee, I jokingly wrote on Facebook that I expected a conversation about the Coptic church. While we went much further afield, as any conversation with Dr. Frazee must because of the astonishing extent of his interests and gifts, I did come away with a copy of his latest manuscript, An Historical Introduction to the Eastern Christian Churches, Copts, of course, included, exam, I pray, not.

My Facebook post prompted a half-dozen comments from fellow Episcopal priests who, like me, learned their church history from Charlie. "Yea, Dr. Frazee," said the Rev. Kay Sylvester. "He rocks." Wrote the Rev. Cn. Diane Jardine Bruce, "Give him my best...and tell him someone (not me!) lost all my 3x5 cards that I made from his classes!" When I passed these greetings along, Charlie's always cheerful face brightened a little more at the mention of each name. He even remembered Diane's copious index cards, photocopied and studied, thanks to her devout Christian pity, by a whole generation of M.Div. students at the Episcopal Theological School at Claremont, California.

Dr. Frazee, you see, didn't use a textbook. At the beginning of his two-semester course in late August, he's say, "The church of Christ was born the moment Mary Magdalene received the news of Jesus's Resurrection..." At the end of the last class in May, he'd say, "...and though Warren's church is Southern Baptist to the core, it takes pains to present a non-threatening, post-denominational face." In between we would have experienced 20 centuries of Christian history and practice -- the Gnostics, ecumenical councils, Crusades, Liturgy of St. John Chrysostom, and perhaps 500 other topics. He would never have looked at a note, missed a name or date, grasped hesitantly for a word, or failed to utter a graceful, perfectly formed sentence.

If you had his class after lunch on Saturday, which I always did, students' energies might flag, but his never did. Each semester, he assigned four or five books and book reports -- The Rule of St. Benedict, The Imitation of Christ, that kind of thing. As for the core material, while he was always pleased to hear his often middle-aged students talk about the Holy Spirit or challenge him with their views on post-structural gender semiotics as applied to the gospel narratives, he said his job was making sure we future ministers knew when the First Letter of Clement had been written what Martin Luther's dates were. I lost five points on the fall 1998 final because I didn't remember the Shepherd of Hermas. Not that I'm licking old wounds.

Speaking of Br. Martin, I wouldn't say that Charlie spent a lot of time on the Reformation. He figured we'd get plenty in our Anglican history and theology classes. He also believes that the mother church would probably have managed to reform without the Protestant reformers. An inactive Catholic priest with a brilliant wife and two brilliant daughters, Charlie served in the Archdiocese of Indianapolis during the 1960s and early 1970s, earning the scorn of his bishop for helping lead protests against the Vietnam War. After he, Kathy, Sara, and Jill came to California, he taught at California State University, Fullerton and, of course, ETSC.

Though retired from both posts, he teaches and lectures frequently and writes incessantly. Some of his prior books are listed here. In September, he's leading a pilgrimage to Catholic Greece. Did you know there were 50,000 Roman Catholics in Greece? You do now, and watch out: It'll be on the test.
By Fr. John at 3:36 PM