Five And A Half Years 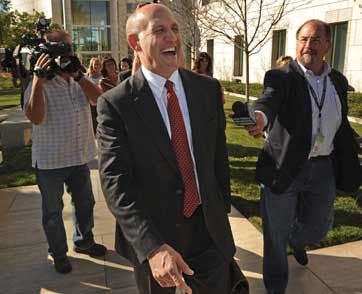 Some people wondered why former Orange County sheriff Mike Carona was so jubilant in January after he was convicted of jury tampering in federal court. They included the judge who sentenced him to five and a half years this afternoon:

[Federal judge Andrew] Guilford said he found it troubling that Carona seemed to be celebrating a victory when he had been convicted of a serious felony.

“Carona,” he told the courtroom shortly before he handed down his sentence, “has given no indication that he wouldn’t ask someone again to lie.”