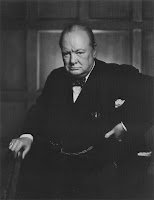 It appears that someone at the White House gave President Obama Andrew Sullivan's post saying that Winston Churchill's government didn't use torture during World War II. During his press conference last night, Obama offered it up as authoritative evidence in favor of his no-torture position.

As it turns out, the record isn't so clear. Ben Smith has now unearthed evidence of British torture centers that was obviously beyond the reach of the resources of "The Daily Dish" and the Executive Office of the President, elusive evidence buried deep within the web site of the British Guardian, damning evidence available only to those who Google with exactly the right search words.

Sullivan now says that if it really happened and Churchill knew about it, then he's a war criminal, too.

Interestingly, if you capture the link to Sullivan's new entry, it says, "the-british-tortured," perhaps the draft headline for the entry. Someone changed the final "Dish" headline to "Three Mansions In London," which sounds like the title of a Moody Blues song. I thought that on this subject, we didn't like weasel words.
By Fr. John at 1:16 PM