The Stones In Winter 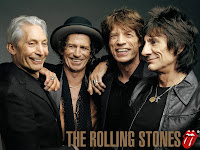 From Alan Light's review of superfan Bill German's new book about the the greatest old rock and roll band in the world:

The Stones themselves come off more or less as you’d expect: Jagger is mercurial and imperious; Richards is down-to-earth, wild and soulful; Wood, still slightly insecure as the “new kid” in the band, compensates by being the most social; and Charlie Watts is so private and detached that he proved constantly elusive.