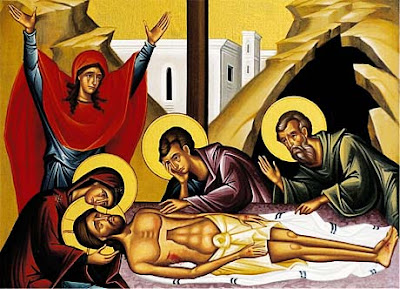 Celebrating Holy Eucharist on Maundy Thursday (which I had the blessing of doing twice this year, in the morning at St. John's School and in the evening with our church congregation) has exceptional poignancy. While every mass is a somewhat mysterious evocation of the Last Supper, according to the powerful symbolism of the church calendar, Holy Eucharist on the Thursday in Holy Week has additional profundity as an anticipation of the light going out of the world on Good Friday. Mass isn't said again until Easter celebrations begin Saturday evening. To say one yesterday for the L'Aquila earthquake's 205 victims, priests needed a dispensation from the Pope.

At St. John's, we consecrated enough bread and wine Thursday night to serve those who came for Good Friday services last night. Afterward, the Altar Guild destroyed what was left. We'll have Holy Eucharist tonight at the Easter Vigil, after 12 young people and adults have been baptized. But between now and then, there's not a single blessed wafer to be had in our church. I have a few in the car, in the kit I use for home and hospital visitations, but that's it.

We know tonight's going to come. The sun will set, the light will be carried into the church, we will proclaim the Resurrection, and Easter morning will dawn. Of course, we know. But according to the church, for a few hours, Christ has died and been put away, wrapped in linen in a borrowed tomb after being harassed and killed by an impromptu coalition of ambitious, misled, frightened, and venal people. Whether you count him as blessed savior or wise teacher, he was the best there was, and because of the flaws and crimes of people like us, he has gone. It does help us count our blessings (and examine our lives) a little more diligently.
By Fr. John at 8:14 AM