Holy Wednesday With Zack And Mark 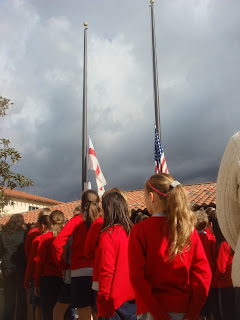 On Tuesday afternoon, two young men, Mark Motley, 18, and Zach Rafferty, 17, died when the car Mark was driving hit a tree along a twisting road in south Orange County. Both had attended St. John's School. Zach graduated from the middle school in 2006, while Mark finished his pre-secondary education elsewhere. In his yearbook photo, Zach has spiky hair, a big Windsor knot in his tie (dad must've helped), and a winning smile. While a number of students remembered Zach (though none of the younger ones watching as flags were raised against a threatening sky), almost all the teachers and administrators did.

The news of his and his friend's death reached our campus on the morning of what Christians call Holy Wednesday. We usually use this time, in the middle of Holy Week, to teach the children about the meaning and power of Jesus's willing sacrifice for all creation. When tragedy intrudes at such moments in the church calendar, pastors and teachers must tread carefully. There's a collect, or prayer, for Holy Wednesday that includes a noble sentiment that may make perfect theological sense but would make none whatsoever, at least right now, to the family and friends of Zack and Mark. "Grant us grace," the prayer reads, "to take joyfully the sufferings of the present time, in full assurance of the glory that shall be revealed." Talking about today's present suffering, it will be a long time before the immensity of these children's loss will even be comprehensible. Take it joyfully? Only to the extent that people may take comfort from remembering the joy these two kids took from life.

Stories abounded today of Zach's irrepressible sense of humor. We heard them from his teachers and his high school friends, most of them St. John's alumni and alumnae on spring break who returned to our campus, the place they'd first known him, to seek some comfort in their grieving, to begin to try to understand the unknowable.

What a blessing that they came here today. One of the reasons young people are such miracles is that they're not afraid to admit when they're hurt, to gather together and cling to each other, to let tears stream down their faces without even trying to wipe them away. We sat with them, praying, counseling, but mainly letting them talk and cry.

Several Friends of Zack had never been on our campus but came along because it was important to his St. John's friends. Most of the teenagers had already visited the crash site. Some had gone to the victims' homes and expressed condolences. That was surely God's work. When the initial shock has passed, when the funerals are over, those who loved Zach and Mark the most may find that they want to keep talking about their heartbreak even though the world wants them to move on, to get over it.

These young pastors, the baptized priests of God who came home to our school today to mourn, promised us that they would keep checking in with the families in the weeks and months ahead, when the first excruciating wound has healed, leaving an ache that may become more manageable but will never go away. How could it, when two such lights have gone out of the world, and in Holy Week, of all times?

O God, whose beloved Son took children into his arms and blessed them: Give us grace to entrust Zack and Mark to your never-failing care and love, and bring us all to your heavenly kingdom; through Jesus Christ our Lord, who lives and reigns with you and the Holy Spirit, one God, now and forever. Amen.
By Fr. John at 5:11 PM