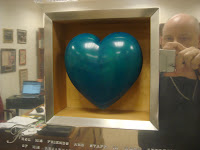 Being trained for ordained ministry includes being schooled in the language of vocation and call. Both for ordained people and the laity, priesthood isn't a job but a vocation, something we grow into, work that becomes richer and deeper in the doing and that also helps us reach further into ourselves, work that is supposed to etch and mold you, to change the way you look at the world and at God's own work in creation. A baptized person's priesthood, whether ordained or not, is supposed to envelop and interpenetrate us. So we don't decide we want a job in the church. We set out to discern whether we are called, through our priestly vocation, to serve for a time in a place alongside the people of God.

Many years before I knew any of this lingo, I knew I was called to serve President Nixon. In the spring of 1979, I was a 24-year-old senior at the University of California, San Diego. I'd fallen a year behind my peers while working on the student newspaper and then two more while working full-time as a reporter in National City, California.

Sam Kernell's class in the American Presidency met twice a week that spring. As my classmates and I awaited his arrival one Tuesday, this thought came into my head, as clear as Johnny B. Goode's guitar: What if you are ever offered a job working for Richard Nixon? I wasn't a Republican, and I'd never been involved in politics. Whose voice was calling me? You tell me. Two days later, Sam walked in and said that the 37th President, then five years out of the White House and living 50 miles up the coast in San Clemente, was looking for research assistants to help with a future book (published in 1982 and titled Leaders).

I wrote two research papers, then went to work for him in New York City as a research and editorial assistant. I 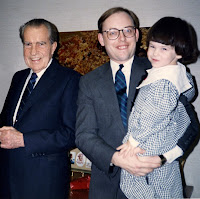 was his chief of staff from 1984-90 and came back to California to run the Nixon Library in September 1990.

And then he died. I may have thought I had been called to serve President Nixon. I may have considered him a vocation. I may even have understood that the experience had changed me forever. But as also sometimes happens on the path to Christian vocation, others had discerned differently. That week in April 1994, in separate conversations, two members of the President's extended family (though neither of them his blood relations) denounced me in a razor cold way that I had never experienced before, even from an angry teenager. It's what a prince's retainers experience when he dies and his successors turn out to have retainers of their own. For her part, Kathy O'Connor, RN's last chief of staff and by that time a loyal aide for 14 years, who had once spent her days fielding invitations for President Nixon from all over the world, found herself presiding over an office where the phone did not ring for weeks as she packed up his files and artifacts. (She is now the Nixon Foundation's chief, a distinct improvement over her predecessor.)

It wasn't a good time, and not just because the boss was gone. My first marriage began to unravel. My best friend among our volunteers, Don Bendetti, who had confidently promoted me for the Library job for reasons I never fully grasped and was yet another of my surrogate fathers, went into the hospital not long after RN's death and had a five-way bypass. Everything tasted of ashes.

Then I learned that the President had named me as a co-executor of his estate and in doing so had called me his friend in his will. All those years, I had been a loyal, sometimes zealous aide. I had traveled with him around the world and to China and Russia. I had talked with him for thousands of hours and kept my share of secrets. I had been his spokesman and helped him with books and articles and any number of nettlesome difficulties. I cared about him very much. But I never would've been so presumptuous as to call myself a friend.

Then, from the grave, he did. He had called me.

Some family members told me, or made clear in other ways, that they were unhappy about the choice President Nixon had made to settle his affairs. Perhaps he had hoped to spare them. Surviving him were lawsuits over the access to his White House tapes and reimbursement for his Presidential materials. We settled one case and ended up trying the other in federal court. The successful outcome paved the way for getting the Nixon Library into the federal system, which happened last year. My fellow executor, the President's stoic personal attorney, Bill Griffin, and I only managed to close the estate in 2008, after 14 years. Executors' fees were $67,000 each, lest anyone think that riches were in store beyond that cherished "friend" in the last will and testament of a complicated, peace-making statesman.

Intuitively understanding my sense of pride, soon after the President's funeral Don Bendetti had a plaque made taking note of my humbling new status as a Friend of Richard and dubbing me a "blue heart" for being true blue, a designation the President had once used for a couple of White House aides who felt dispirited during the Vietnam years. Ultimately, and especially after I began to follow a call to Holy Orders (I was ordained in January 2004), I understood that my job had become less a means of feeling valuable and useful, more an authentic expression of the servant I was meant to be of a larger purpose.

We learn to discern our calls by listening to our hearts, and to our bishops, if we're lucky enough to have one. Late last year, through both my heart and bishop, God seemed to be saying he wanted me to be a full-time priest. As I say goodbye in mid-February to my work at the Nixon Foundation -- 30 years after first meeting a great if imperfectly understood man who had made the world safer for my children and theirs, a man who deserved my best energies and far, far more -- my heart sounded blue.
By Fr. John at 5:15 PM