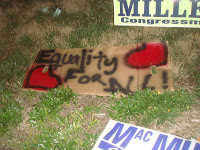 The body politic and the body of Christ are similarly conflicted about whether gay and lesbian people should be allowed to get married. Both bodies hope the other body will find a solution -- or, at least, lift the cross from their shoulders.

For years, moderate and undecided Protestants could say that since marriage was a civil contract, whether to permit gay marriage was entirely up to the state. All the church had to figure out was whether to permit its ministers to bless same-sex unions. The California Supreme Court deprived the church of its copout last year by legalizing gay marriage. As a result, with all ministers now having the legal authority to marry same-gender couples, the church's argument about blessings automatically became a much more contentious argument about marriage.

Fence-sitters breathed a secret sigh of relief when Prop. 8 passed in November, again making the to-marry-or-not question a civil rather than an ecclesiastical one. Michael A. Lindenberger now explores whether the same copout will work for government. In those states that permit civil unions for gays and lesbians, the government would go one step further and say nobody gets a civil marriage:

[G]ive gay and straight couples alike the same license, a certificate confirming them as a family, and call it a civil union — anything, really, other than marriage. For people who feel the word marriage is important, the next stop after the courthouse could be the church, where they could bless their union with all the religious ceremony they wanted. Religions would lose nothing of their role in sanctioning the kinds of unions that they find in keeping with their tenets. And for nonbelievers and those who find the word marriage less important, the civil-union license issued by the state would be all they needed to unlock the benefits reserved in most states and in federal law for married couples.

Not likely, of course, as Lindenberger notes himself. Heterosexual couples won't want to give up their right to civil marriages. Churches run into the same problem, even though the idea of separating the civil contract from the marriage blessing has significant historical warrant, at least for Protestants. During and after the Reformation, some churches told couples to take care of the legal contract at city hall (or on the church steps) and then come before the altar for a blessing. Churches that adopted this policy today would theoretically avoid the corrosive debate about marrying gay and lesbian people, since they'd only be performing blessings. After all, we bless Bibles, prayer books, and crucifixes, and bless animals on St. Francis Day. In practical terms, though, it doesn't work, for the same reason Lindenberger identifies: Heterosexuals wouldn't want to give up their big church marriages for the sake of solving a minority's problem.

So no copouts allowed. The great cultural debate of our time continues.