Did Illness Bear Her Heart Away? 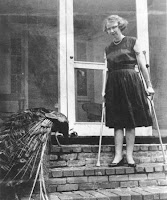 In the March "American Spectator," a review by Algis Valiunas of Brad Gooch's new biography of Flannery O'Connor (now on my Kindle for a few bucks less than the print-is-dead version). The cheerful, thoughtful, conventional Christian orthodoxy of her letters always seemed to conflict with the darkness in her fiction, especially the novels, Wise Blood and The Violent Bear It Away. I always thought I just wasn't subtle enough. But Valiunas and Gooch note it, too. Perhaps it was the struggle against chronic, wasting disease (she was diagnosed with lupus as a young woman) and the specter of mortality. Valiunas:

Gooch lays out the evidence from O'Connor's letters and essays for her belief that [deeply troubled novel protagonists] Motes and Tarwater were truly touched by God, but he also cites the opinion of the novelist John Hawkes, a friend and correspondent of O'Connor's, "that hers was a 'black,' even 'diabolical,' authorial voice." O'Connor assured Hawkes it wasn't so, but, dubious as it may be to question the word of a virtual saint, the books appear lit by a fire from below that bespeaks not the terrible speed of mercy but the terrible slowness with which the tormented soul is consumed. O'Connor died at 39. To judge from her fiction, she had likely had all she could take.