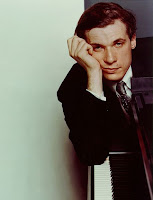 The Canadian pianist Glenn Gould recorded J. S. Bach's "Goldberg Variations" in the studio twice, in 1955, when he was 23, and 1981. Though the first is one of the most famous and highly regarded recordings in history, Gould decided it was too gimmicky and fast, hence the 1981 session (plus, he said, someone had gone and invented stereo and Dolby). It was Bach, not Chopin, he insisted. As an older man, he seemed better equipped for the cool restraint the music demands.

"Goldberg," named, perhaps, for its first performer, comprises a beginning and ending aria, or song, and 30 variations. A 2002 reissue of the 1955 record included a lengthy studio outtake, complete with banter between the eccentric Gould and his producer. I didn't pay much attention to the outtake cut until this week, when I found a couple of treasures. At one point, Gould, who always insisted on a special, low-slung chair while recording, says that he wanted to play one variation sitting on an upside-down wastebasket. Then, when the producer calls for a second take of the final variation, No. 30, Gould significantly digresses (I added the punctuation, since Gould spoke without it):

You know what this piece is, don't you, this Quodlibet? It's a combination of German popular songs of Bach's time.... That's why it's called Quodlibet. Apparently it was a fashion that the family sat around their living rooms trying to harmonize popular tunes together, within the same harmonic framework, you see. The two tunes in this are...I've forgotten the names of the songs in German, but they're both very dirty songs. [He plays the tunes.]

By the way, I have a Quodlibet of my own; it came to me in the bathtub the other night. One of these times, I'm going to be invited to give a concert on the Fourth of July, I'm sure, and when I do, I've figured out that by leaving out the repeats in the "Star Spangled Banner" and starting your entry at the 13th bar of "God Save the King," and then playing "God Save The King" over again, and altering the harmony in the second half of "The King" to modulate to the supertonic region, it has the most marvelous effect. Listen to this [Gould plays it.]...Unfortunately, we have parallel octaves at the end, but it works beautifully otherwise.

"That's terrific," says the patient producer. Gould then says he's ready to begin the second take of No. 30, but the producer says he has to change the tape. All that yakking about the supertonic. Wikipedia reveals that two of the popular songs Bach used for No. 30 were titled Ich bin solang nicht bei dir g'west, ruck her, ruck her ("I have so long been away from you, come closer, come closer") and Kraut und Rüben haben mich vertrieben, hätt mein' Mutter Fleisch gekocht, wär ich länger blieben ("Cabbage and turnips have driven me away, had my mother cooked meat, I'd have opted to stay").

At iTunes you have to buy the whole 1955 reissue to get the outtakes. Here's Gould playing variation No. 6 in 1981. Listen for his humming, which he claimed was unconscious. He died in 1982 after suffering a stroke at age 50.