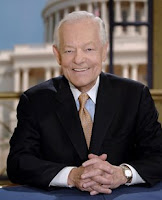 During the Oct. 15 Presidential debate, moderator Bob Schieffer confronted Sens. McCain and Obama with a harsh reality. At least to him, it didn't look like the snowballing financial crisis would permit any big spending. Here's how I liveblogged the exchange:

Question on deficits; aren’t both sides ignoring reality? What from your $200 billion+ proposals will you cut back? Obama doesn’t answer. McCain doesn’t either, at first. Pushes mortgage plan and energy independence. Then: Across-the-board spending freeze. Will cut subsidies for ethanol as well as tariffs on sugar-cane imports. Finally an answer, followed by an attack on Obama as a pork-barrel beneficiary. Prof. Obama explains why across-the-board freezes don’t work (Washington insiders don’t let them work is why; he doesn’t say this, however). Ritualistic attack on McCain for voting for four out of five Bush budgets.

Perhap when Obama wasn't answering, he was thinking, "Cut back $200 billion? Heck, Bob, I'll spend four times that by President's Day, and even then my progressive friends will be heaping hot coals on Republicans for nickel-and-dimeing me out of the last $100 billion. Within four months of tonight, the House appropriations committee will have dusted off a generation's worth of its Democratic members' thwarted dreams, and I will have stuffed the whole package down the country's throat by promising catastrophe if they don't go along with me. Not only will I not pare back my promises, Bob, I'm going to use this crisis to devise a structural increase in the size of the federal budget to the tune of 15-20% with even less debate than the last round of salary increases for federal judges."

Schieffer's question was a naive, Herbert Hoover kind of thing, suggesting that fiscal discipline would be the main way out of our troubles. The candidates played along, McCain by endorsing spending freezes and Obama by criticizing George W. Bush's deficits. How times have changed. Obama's deficits will dwarf Bush's, and liberals once again reckon deficits as righteousness, just as Bush did (and critics didn't) when they were undertaken in the name of national security and the Iraq war.

If Obama had offered a glimpse of his plans, then today I'd agree with all those who say that he had a mandate for the stimulus package and the massive increase in the size and role of government it portends. I might even agree with critics of the GOP such as Andrew Sullivan who say that refusing to give the measure bipartisan support was irresponsible during such a severe crisis.

But Obama didn't, and so I don't. Since McCain was probably doomed after the Lehman Bros. collapse in mid-September, Obama's victory wasn't a mandate dramatically to re-envision the role of government in the name of recession recovery. To be fair and balanced, Ronald Reagan's critics said the same about his 1981 tax increases. Some economists argue that the tax cuts didn't drive the mid-1980s recovery, just as Obama's critics will say that the business cycle had more to do with the recovery (assuming it comes) than the stimulus.

Since historians and journalists still debate the effectiveness of the New Deal, one assumes these partisan and ideological debates about the relative merits of tax cuts, social spending, public works projects, and frugality will persist forever. As President Nixon once told me, it's always about right vs. left. Perhaps there's even some comfort in that, especially for those of us who think the right answer is usually somewhere in the middle. But Reagan was right as well: The federal budget never shrinks. The arc of the fiscal universe is long, and it tends toward statism.
By Fr. John at 8:34 AM