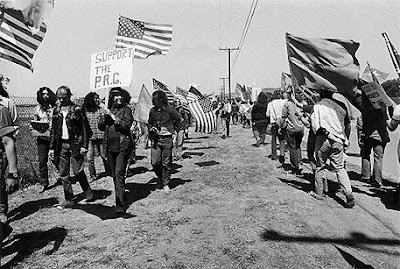 When a smirking Sean Hannity plugged Jane Fonda's new blog tonight, it occurred to me that he assumed that Fox viewers would flood it with negative comments thanks to residual anger over her support for communist North Vietnam and Viet Cong. If so, that's pretty adolescent, Sean.

It's an interesting, revealing site. I'm starstruck enough to be impressed by a movie star (or musician) offering personal observations and details in real time, especially when they type them out themselves. Most of Fonda's current entries concern rehearsals for her new Broadway play, "33 Variations."

In one entry, she acknowledges people's continued fascination with her "Hanoi Jane" days:

I intend to answer these questions. I would like nothing better than to put these lies and myths to rest once and for all. I will try to do this as soon as possible.

Her blog even includes a local angle: A photo showing her demonstrating outside the Western White House in April 1973 as South Vietnam's President Thieu paid a visit to President Nixon. Fonda (center left, carrying a sign) and her colleagues were arguing (incorrectly) that the Viet Cong were the legitimate government of South Vietnam.
By Fr. John at 6:41 PM