"Have Them Send A Chopper, Daddy!" 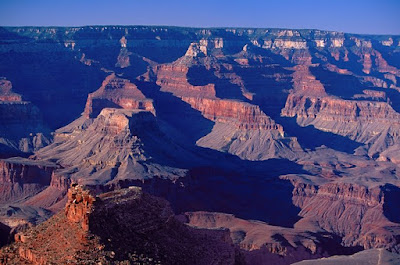 Overrated
A travel-savvy friend sent this link to a photo feature of 24 destinations deemed overrated by LA Times readers. Some are obvious, I suppose. Las Vegas? Vulgar and expensive, said a grumpy reader. Of course she hated gambling, so you have to wonder whether she and her husband had done enough research. Nothing to do on Catalina Island? I guess I can buy that, although the buffalo, imported years ago for a movie shoot, are worth hunting down.

But also on the list were Bali, Costa Rica, and Greece, where notwithstanding its being the birthplace of democracy the dissenting couple had a bad experience as a result of loud music and people smoking too much in a nightclub. It's a free country; blame it on Pericles.
As I read through the escalating grumps, I said to myself, "Somebody had better not complain about the Grand Canyon." The friend who sent me the link probably said the same thing to himself about his beloved Hawaii, which didn't make the list. But sure enough, here's bellyache #18:

Although the canyon is certainly a geological sight to behold, the campgrounds are atrocious, about as charming as pitching a tent in the alley behind your local big-box store and just as close to nature. Hiking is limited to down the canyon and up the canyon, and although, yeah, I know that's why you're there, not every member of every family is capable of such strenuous effort. Despite the family demographic, you won't find playgrounds to keep the kids grounded. The Grand Canyon is a great destination if you are under 30 with a good prostate, balance and a taste for trail mix.

The thing is, looking at the Grand Canyon and walking in and out of it are why we go there. That fact actually can't be logically modified by a "while" or an "although." For the same reason, you just can't say, "Although Renoir's 'Luncheon Of The Boating Party' is a beautiful painting, it doesn't say anything funny or serve caffeine-free Diet Coke." In other words, the Grand Canyon is a great destination, period. When a culture has reached the point where people are willing to complain in print, over their own names, about the alleged shortcomings of the most beautiful places in the known universe, we might consider redoubling our efforts in the "count your blessings" department. One of my blogfollowers (my elder daughter) and I walked in and out of the canyon in November 1998. Quick energy from trail mix, taken in small handsful every 20 minutes, was our salvation. While my prostate was already well beyond 30, the attraction, which indeed has fewer rest rooms than Universal Studios, offers more than enough bushes to hide behind.
On the canyon floor, whose two-billion-year-old rock should give the young earth folks something to thing about, we stayed at the Phantom Ranch, where (at least back then) visitors were offered either steak or beef stew. In the men's bunkhouse, I lay awake most of the night, listening to the rain and wondering how we were possibly going to make it out again.
Yet walking up the Bright Angel Trail the second day was actually easier than the descent. Something about what walking straight downhill for six or seven hours does to your calve muscles. About a third of a way down, Valerie, 13, had sat down on a rock and said, "Daddy, I can't go any further. Have them send a chopper." The next day, she didn't complain once. She walked, and rested, and walked some more, for nearly nine hours. I will never be able to describe the feeling of arriving with my daughter at the trailhead. Overrated, huh? Top five experiences of my life. The LA Times and its reader might consider giving it another try. I suggest they wear two pair of socks, however. I can still feel the blisters.
Photo by Steven Pinker
By Fr. John at 4:32 PM