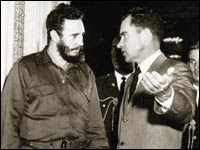 As the Cuban government celebrates the proud achievement of perpetuating Stalinism for 50 years, a reprise of a couple of my New Nixon blog entries from early 2008, as Fidel passed the fatigues to Raul. The first, posted on Feb. 23, was written after a distinguished journalist tried to lay what he characterized as the failure of U.S. policy at the feet of you-know-who:

In this NPR commentary, Daniel Schorr (a distinguished reporter and commentator and regular participant in Nixon Center programs in Washington) argues that 50 years of misguided U.S. policy toward Cuba began when Vice President Nixon, after meeting Fidel Castro, said he was “incredibly naive about communism.” Schorr implies that every misstep in U.S. Cuba policy, from the Bay of Pigs invasion to the Kennedy Administration’s assassination schemes, grew from RN’s observation. That’s hard to believe based on Mr. Nixon’s complete analysis, contained in a long memo he sent President Eisenhower after meeting alone with Castro for three hours in April 1959:

Whatever we may think of him he is going to be a great factor in the development of Cuba and very possibly in Latin American affairs generally. He seems to be sincere. He is either incredibly naive about communism or under Communist discipline — my guess is the former, and as I have already implied his ideas as to how to run a government or an economy are less developed that those of almost any world figure I have met in 50 countries. But because he has the power to lead to which I have referred, we have no choice but at least to try to orient him in the right direction.

When Castro argued that his people didn’t want free elections because they’d produced bad results in the past, Mr. Nixon replied that he should therefore hold elections as soon as possible “to restore the faith of the people in the democratic processes.” Castro soon demonstrated that he had no interest in redeeming Cuban democracy. As for the naive faith in communism Mr. Nixon identified, it laid waste to Cuba’s economy and turned it into Moscow’s pawn (and a potential ground zero) in the missile crisis of 1962.

Mr. Nixon acknowledged the force of Castro’s personality, predicted his regional influence, and tried to persuade him to serve his people. How could he have done better?

One of Richard Nixon’s last acts as an elder statesman was calling on the U.S. to drop its generations-long embargo of Cuba. In his book Beyond Peace, published posthumously in 1994, he said that it was time for those who hoped squeezing Castro would drive him from power to cry uncle. Fourteen more years of the embargo have amply proved Mr. Nixon right. Instead, he wrote in ‘94, since Castro no longer posed a threat to the U.S. or its interests, “[I]t is time to shift the central focus of our policies from hurting Cuba’s government to helping its people….This means we should drop the economic embargo and open the way to trade, investment, and economic interaction, while insisting that ideas and information be allowed to flow as freely as goods.” Until now, U.S. policymakers have chosen to wait Castro out. As he leaves the stage, perhaps it’s set for a last-act flourish by President Bush: A visit to Havana, Nixon-in-China style.

I have always believed that Cuba has made economic realtionships with countries around the world, including the United States. I do not believe that Fidel Castro is so lucky, to not have been assasinated, in fifty years, by his enemies or in reality, his associates.

American born, with Cuban parents, I have always heard the horror stories and disbelief, on how such a terror, can maintain and continue to live so long. And my answer has and will always be, ECONOMICS.