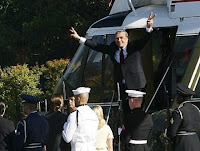 The most riveting scene in "Frost/Nixon" is completely fabricated, as playwright and screenwriter Peter Morgan has candidly admitted. A tipsy former President (Frank Langella) calls David Frost (Michael Sheen) and describes them as a pair of overachievers out to show the world that they were good enough. He says that by "our success" in their televised interviews, they'll prove their critics wrong.

Frost gulps and agrees with RN's analysis. You get the feeling that he'd never voiced his own fears and motivations or even admitted them to himself. Imagine that: A fun-loving child of the 1960s bowing to the superior introspection of the most introverted and outwardly stoic of Depression-bred public figures. He then warns Nixon, "Only one of us can win."

About that, the fictional Frost is wrong. Thanks to the original Frost-Nixon interviews, the British TV personality won the fame and riches he craved. Thanks in part to Ron Howard's "Frost/Nixon," the historical Nixon is beginning to win the measure of redemption he never dared hope for in life.

As my New Nixon colleague Frank Gannon has noted, Langella's gripping Nixon, like the statesman's milieu he occupied and the world he changed for the better, is large and consequential. He dominates almost every scene in which he appears. (One exception is his awkward, imaginary appearance before something called the Orthodontists Society of Houston, the kind of speaker's circuit event that he never did.) When Nixon passes through a room in the movie, the factotums and crew members part like the Red Sea. It's obvious why alarmed Nixon critic Elizabeth Drew called Howard "dishonorable." His Nixon shatters the confines of marginalization, one-dimensionality, and caricature thrust upon the historical Nixon as the result of Vietnam-era passions. It's the first film Nixon worthy of the real thing, the first that will help younger audiences begin to understand him and his tumultuous era.

Not surprisingly, the film doesn't convey much Watergate understanding. Its main conflict, between TV lightweight and political heavyweight, depends on fudges. Morgan and Howard misconstrued RN's famous "if the President does it, that's means it's not illegal" as being about Watergate rather than a plan to increase surveillance of domestic militants during wartime. As for Watergate itself, the movie Frost accuses Nixon of having claimed he didn't know about the break-in until June 23, which is obviously untrue. He read about it in the paper on June 18, along with the rest of the world.

All in all, "Frost/Nixon" is conventional in its failure to communicate that Watergate and Vietnam were inextricable. Whether Mr. Nixon ever intended a criminal cover-up of the June 17 burglary is doubtful. The preponderance of the White House tapes from 1972 show that he believed that anyone involved in the burglary itself (as opposed to previous national security matters) should own up. Russ Baker's intriguing if highly speculative new book, Family of Secrets, asserts that President Nixon correctly assumed from the beginning that the botched burglary was a CIA setup, but that's a blog for another day.

At the film's climax, Langella's Nixon owns up by saying he let the American people down, a moment that occurs after adjutant Jack Brennan (portrayed by the less-entertaining-than-the-real-McBrennan Kevin Bacon) panics and interrupts the final taping. Afterward, James Reston Jr. (Sam Rockwell), the most anti-Nixon of Frost's team members, exults at seeing the former President's face "ravaged by self-loathing and defeat."

It's a deceptive denouement, since it was actually Frost who interrupted the taping after misunderstanding a sign the real Brennan was holding up that said "let him talk." Mr. Nixon had chosen to make a statement of accountability. Neither Frost nor Reston maneuvered him into it.

Besides, self-loathing wasn't in Mr. Nixon's nature. By his death in 1994, he was at peace with what he had achieved in the nearly 20 years since his resignation, both personally and publicly. What mattered most, besides his family, was having the ears of his successors, and at that he succeeded, advising each one from Ford to Clinton and even playing a decisive role in U.S. relations with Russia and China.

Contrary to most conventional wisdom, he never expected broader rehabilitation during his lifetime. He said it would take at least 30 years before he began to get a fair shake. Yet again, he called it about right.
By Fr. John at 7:52 PM