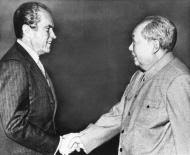 AP's survey of the approaching 30th anniversary of the establishment of U.S.-PRC relations, which began under Richard Nixon:

The countries have now developed a more "complex and mature" relationship — one that can withstand the inevitable frictions that will arise, said Zhu Feng, director of the Center for International and Strategic Studies at Peking University.

But it is the level of economic interdependence that has become most striking. China now owns more than $500 billion in U.S. government bonds, more than any other nation. During the presidency of George W. Bush, as Chinese exports to America boomed, China's trade surplus hit $163.3 billion in 2007.

The biggest challenge going forward will not be political so much as economic, experts say. With the countries' economies so deeply linked, the continuing global financial crisis will take top priority for Barack Obama when he assumes the presidency Jan. 20.

"Both of us are feeling the pain of the economic slowdown. The question is whether we're going to be able to find a way to work cooperatively or whether we fail and move toward blaming each other," [veteran diplomat and China watcher J. Stapleton] Roy said. "If anything has been shown, it's that our economies are so closely linked now, neither can punish the other economically without inflicting pain on itself."