A Prophet For Then And Now 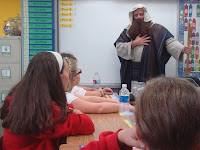 Isaiah, the prophet of the Christian season of Advent, lived in the 8th century before Christ and advised a scared young king named Ahaz, who had the bright idea of leveraging the Assyrians against the Syrians to keep his tiny kingdom of Judah safe. Isaiah advised him to trust in God instead of diplomacy or military power:

For a child has been born for us, a son given to us; authority rests upon his shoulders; and he is named Wonderful Counselor, Mighty God, Everlasting Father, Prince of Peace. [9:6, NRSV]

It would be a little like President Bush saying to Secretary Gates that then Russians and al-Qaeda were coming, and Gates replying, "Wait for the messiah; trust not in B-2s and the CIA." Hebrew Testament potentates usually found prophets annoying as best.

As far as Christians are concerned, Ahaz would've had to wait 740 years for the promise to be kept, in the form of the Bethlehem baby. In "Messiah," G. F. Handel set the King James Version of Isaiah 9:6 to such sublime music that the words can seem to belong exclusively to Christ's story. (That's world-class bass-baritone Robbie Britt at right, appearing in a recent Nixon Library performance of selections from Handel's oratorio.) Yet Christians 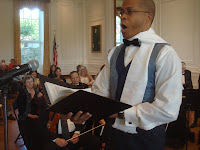 ' challenge is to enjoy the wonder of Isaiah's prophecy without diminishing the significance in his own time of his powerful vision of peace and God's saving power.

My church friend Randall Lanham (above) deftly walked that frontier while appearing as the great prophet in my 5th grade religion classes at St. John's. Randall's message for the children: "God always keeps his promises," whether the Hebrew Testament's promise of justice and righteousness or the New Testament's of a Christ to save all creation.
By Fr. John at 8:16 PM