The Awful Aughts And The Hungry Forties 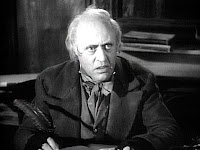 It may be a lean Christmas for the 1.3 million who have lost their jobs in the last six months as well as for their families and all who depend on them in our interdependent time (including tax revenue-strapped states that can't cover everyone's unemployment checks).

Charles Dickens' A Christmas Carol, which we're enjoying in our reading circle at St. John's, was the product of bad times in England -- the so-called Hungry Forties. Working-class and poor families were hammered by a ferocious downturn. Many elites concluded that such suffering was just the way of the world in a heartless new age.

As Scrooge himself notes early in the narrative, the Poor Law was in full vigor, but compared to the provisions we make today for those in need, it was weak gruel. In 1834, in the spirit of the times, Parliament had passed reforms designed to make assistance even harder for poor people to get. (That's Alastair Sim above in the 1951 film "Scrooge," which follows the text pretty faithfully.)

Scholar Michael Slater shows that in his simple story, Dickens accomplished two missions. He capitalized on a nostalgic re-embrace of pre-Victorian Christmas traditions which had lagged in the industrial age. He almost single-handedly reconceptionalized Christmas as a magnifying glass for people's better angels, whether they were faithful or not. Scrooge's nephew gives the key speech:

I have always thought of Christmas time, when it has come round -- apart from the veneration due to its sacred name and origin, if anything belonging to it, can be apart from that -- as a good time: a kind, forgiving, charitable, pleasant time: the only time I know of, in the long calendar of the year, when men and women seem by one consent to open their shut-up hearts freely, and to think of people below them as if they really were fellow-passengers to the grave, and not another race of creatures bound on other journeys.

Our Awful Aughts don't quite compare to England's Hungry Forties. Scrooge complained that Bob Cratchit picked his pocket every Dec. 25, whereas Uncle Sam and a variety of entities pick most of ours every third day. Hundreds of billions are given to charity (though less this year, with most foundation and individual portfolios down by a third or more). At least in the U.S., few suffer as horrendously as 160 years ago.

But one thing hasn't changed since Scrooge's time. The cry is still heard, as in Victoria's day, that Christmas isn't what it used to be. Neither politically radical nor exceptionally pious, Dickens probably wouldn't bemoan the commercialism or even the occasional Christlessness. But the occasional heartlessness? The periodic selfishness? These things he would recognize as enduring human traits. This year, we really need a good Christmas.