From North Carolina To The Moon 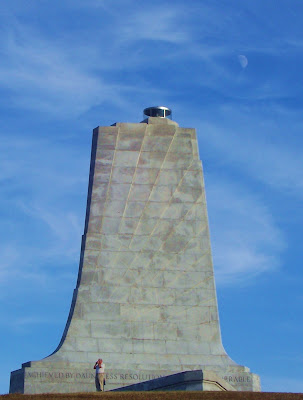 Bob Lemberger, who helped organize the Nixon Library's popular model train exhibitions over the holidays in 2006 and 2007, writes as follows about an interplanetary image he brought back from a recent visit to North Carolina, birth state of flight:

I took it at Kill Devil Hills, not Kitty Hawk, where the Wright brothers made their historic flight. Atop the large hill named Big Kill Devil Hill is a granite monument dedicated in 1932 commemorating the first man-powered flight in 1903. The dedication was attended by Orville Wright; Wilbur had passed away in 1912. The hill was often used by the brothers for testing gliders for a three-year period starting in 1900 and was the site of their first attempted powered flight, which resulted in Wilbur crashing their Wright Flier. Three days later, after some repairs, Orville made the first successful flight from level ground a few hundred yards away.

On July 20, 1969, Apollo 11 touched down on the moon with a small piece of fabric from the wing of the 1903 Wright Flier along with a small sliver from one of its propellers. Look in the upper right hand corner of the picture, and you can see the moon rising. I like the picture, as it captures where man's powered flight first began and where it has gone -- so far.

I like your blog! Check out my blog for a free internet speed test. Comments appreciated!