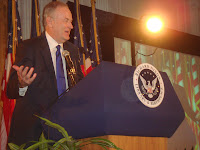 Bill O'Reilly, host of the most popular news program on cable television, believed that he's summoned, and uniquely positioned, to serve the public, which he calls "the folks," in an era of change and crisis. "The television 'Factor' is going to be a major factor in this country," O'Reilly said Friday evening before a crowd of nearly 1,200 at the Nixon Library. "The O'Reilly Factor's" mission in the year to come: Figuring President Obama out and, if necessary, holding him accountable. "Nobody else in the media's doing what we're doing," he said.

While O'Reilly believes that Obama realizes his political future depends on rescuing the economy in his first two years, the PE's perspective on the war on terrorism seems murkier. One reason: his aggressively anti-torture AG-designate. "There's not an intelligence guy in the country who wants to look over his shoulder and see Eric Holder, who may indict you for anything," O'Reilly said, adding that his sources tell him that professionals are leaving the intelligence services at a startling rate as Bush Administration opponents demand indictments and trials. If there's no new terrorist attack, O'Reilly said, "then they'll harass Bush and Cheney until 2022." If, heaven forbid, there is a new attack, then the anti-torture movement will lose its salience: "Bush and Cheney will say, 'Yeah, [when we were in] we beat the crap out of 'em'."

As harsh as that looks in type, it went over great with O'Reilly's audience, with whom he got into an easy rhythm the moment he took the stage. He's plain-spoken, non-ideological, funny, and unapologetic about his sometimes aggressive populism. It sounded as though everyone watches his show daily and had seen the recent greatest hits, including his famous brawl with Rep. Barney Frank. "I haven't paid for a sandwich and soda in a deli since that interview," he said, adding that the secret of his success is that "I just reflect what you feel." Whether on the left or right, he said, Americans are angry, "and it's justifiable, when your 401(k) evaporates, and people on Wall Street are stealing us blind."

One of the reasons Sen. McCain lost the election, O'Reilly said, is that he didn't sound angry enough at those who had brought the economy to the brink of chaos. O'Reilly said he was sorry he too hadn't paid more attention to economic issues on "the Factor" before the mid-September crash. "We were busy looking to the outside for the threat," he said. 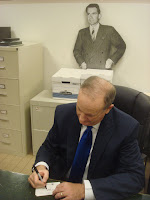 O'Reilly is promoting his fifth non-fiction bestseller, the highly readable memoir A Bold Fresh Piece Of Humanity. He invoked old-fashioned virtues of family and discipline as learned from his parents in Levittown, New York and the nuns in parochial school. An opponent of gay marriage, he said Obama's choice of the evangelical Pastor Rick Warren to pray at his Inauguration was "a stroke of genius" designed to further separate himself from his controversial former pastor and friend, Jeremiah Wright. "Obama's thinking, 'Okay, the gays are mad. Where're they gonna go?' My five-year-old son says, 'I'm running away,' and I say, 'See you later'." Only if Obama fails to deliver on key domestic issues such as national health insurance, O'Reilly said, would he be in danger of losing substantial elements of his so-called progressive supporters.

Asked about President Nixon, O'Reilly said that Fox News colleague Monica Crowley, an aide in the former President's New Jersey office, has told him of RN's graciousness and many unheralded gestures of support to those in need. "He was on the way of doing some significant things when he got hung up on Watergate, the same way Bush got hung up on Iraq," he said. "He paid for his mistakes."
By Fr. John at 11:07 PM