Hey, Ron: How About "Moorer/Nixon"? 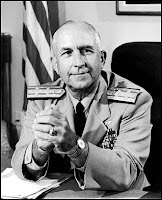 During 1969-73, before he was consumed by Watergate, Richard Nixon redrew the geopolitical map, repositioning the United States in relationship to the Soviet Union and China and helping usher in the era of globalism. His administration also conducted secret talks with the North Vietnamese in the hope of bringing U.S. involvement in Indochina to an honorable end.

These initiatives and others made Pentagon hawks so nervous that they spied on the President and his national security adviser, Henry Kissinger. Papers illegally stolen from the White House over a 13-month period by a Navy yeoman were passed up the line to the chairman of the Joint Chiefs, Thomas Moorer (pictured here), who eventually admitted he'd read them without inquiring too aggressively where they'd come from. The thefts were uncovered by the famed White House Plumbers, figures of fun for most historians, little-sung heroes in this case.

New details about the Radford affair, which struck at the heart of the concept of civilian authority over the military, are revealed in an article by Fox News's James Rosen, author of a remarkable new biography of John Mitchell whose new insights about Watergate and John Dean, though startling, didn't merit a review in the New York Times.

Perhaps for some of the same reasons, Radford never got as much as attention as Watergate. Those who like to say that Mr. Nixon was undermining the Constitution have never seemed exercised about the tunnel the brass were busy digging under the White House. As "Frost/Nixon" shows, Nixon as sinner is potentially big box office. When he was sinned against? Rarely green lighted.

One reason may be that for the sake of the military's credibility, the President chose not to make more of the affair. According to Rosen, here's how he put it on one of the tapes:

I think there were many reasons why RN did not accuse the brass in public:
1. He never made big decisions without a good reason. Spying the president was no big deal because for the military he had not so many secrets. The biggest secret was the secret negotiations of HK.
2. It would not serve the country to dismiss a high officer during wartime. RN knew the North Vietnamese would have enjoyed it.
3. Nixon was not a hawk, but he was on good terms with them; even with general Curtis LeMay. Can you win a war without hawks?
4. Nixon had been a naval officer himself and actually was on good terms with most of the military. It would be painfull for himself to dismiss a war hero like admiral Moorer.

The ultra left wanted to fly from Vietnam, the ultra right wanted to conquer North Vietnam. Both options meant trouble for the for the Balance of Power during the Cold War.
After the deals of RN with Mao and Brezhnev Vietnam was not important anymore, but it did stay a matter of loyalty to an ally.

So the brass were no problem, but perhaps something else.
RN went to China and at the same time some folks organised a third grade burglary. Coincidence?
One must admit that it was quite convenient for both right and left that some aids made that big mistake.
Both John Dean and Bob Woodward started on the politically right side wing and conversed to the left. After all those years I don't blame Dean that he made a deal with Sirica or that he accused RN. But in his last will he should give an explanation for why he did not warn RN one year earlier about the Watergate conspiracy.

Hi, Fred! I just noticed this thoughtful comment today. (I'd stopped blogging for a while.) Thank you. I hope this finds you well.