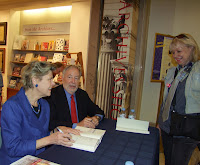 Eighteen-and-a-half has a powerful resonance for Americans who are at least two score and 18, since it's the length, in minutes, of a mysterious deletion in a Nixon White House tape that became part of the Watergate story. The volunteer sound technician at St. John's Episcopal Church, Dale Griffith, tells me my sermons average about that length -- a bit long for a highly liturgical service such as ours. While their political affiliations are naturally varied, the people of God at St. John's are gracious about my Nixon antecedents. But they probably sometimes wish that I would perform a deliberate erasure of a portion of these long, one-sided conversations, and do it beforehand.

The magic number came up again this week when historian and former Nixon archivist Maarja Krusten, a member of the National Archives foundation, attended an event at NARA in Washington featuring historical novelist Max Byrd and Cokie Roberts, the ABC News commentator who gave a talk about First Of Hearts: Selected Letters Of Mrs. Henry Adams, for which she wrote the introduction. As Krusten wrote at her blog NixoNARA:

As Bruce Guthrie’s photo shows, I was thrilled at the chance to tell Ms. Roberts that I was a member of the Foundation and how much I enjoyed and appreciated the wonderful work it does in partnership with the National Archives. Max Byrd and I exchanged some joking comments. When I told him I was a former NARA archivist who once worked with the Nixon tapes, he asked if he should tear out 18-1/2 pages from the book. I laughed and said, “No, no, we at the National Archives are all about preservation and disclosure. Gotta have the whole book!”