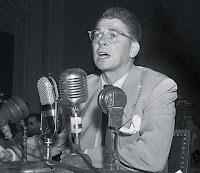 Big government comes in handy when you really need it. Beginning in the 1940s, Ronald Reagan earned the friendship of J. Edgar Hoover's FBI by informing on his Hollywood colleagues. According to author Seth Rosenfeld, the FBI reciprocated by overlooking Reagan's omissions in his national security paperwork as governor and, on the eve of his gubernatorial candidacy, saving him from the scandal of his son Michael associating with the son of a mobster. Rosenfeld was interviewed by Terry Gross on the Aug. 21 "Fresh Air":

The FBI did a personal and political favor for Ronald Reagan in 1965. FBI agents at the time were investigating the Bonanno crime organization. Joe Bananas, as he was known, was one of the most notorious mobsters in America and had recently moved to Arizona.

FBI agents in Phoenix were investigating him when they discovered that Joe Bananas' son, Joseph Jr., was hanging out with Michael Reagan, who was the adopted son of Ronald Reagan and Jane Wyman, and they reported this to headquarters.

This happened in early 1965, just as Ronald Reagan was about to embark on his first run for public office, the governorship of California. And when FBI agents warned him that his son was hanging out with Joe Bonanno's son, he was very grateful. And according to an FBI report, Reagan said "he was most appreciative and stated he realized that such an association and actions on the part of the son might well jeopardize any political aspirations he might have." Reagan stated he would telephone his son and instruct him to disassociate himself gracefully and in a manner which would cause no trouble or speculation. He stated that the bureau's courtesy in this matter would be kept absolutely confidential. Reagan commented that he realizes that it would be improper to express his appreciation in writing, and he requested that the agent convey the great admiration he has for the director and the bureau and to express his thanks for the bureau's cooperation.