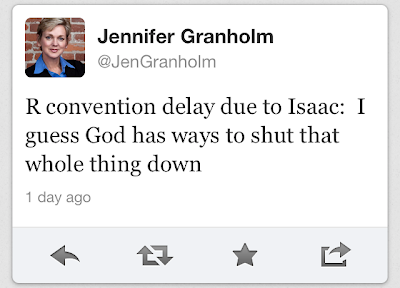 After a barrage of criticism, Michigan's Democratic former governor tweeted uncle. She said she'd been kidding and apologized, and appropriately so. Any serious effort to associate God's intentionality with a potentially deadly natural disaster would have been poor theology and in poor taste.

But when conservative legal authority John Eastman made the same kind of comment after an earthquake at the Nixon library in June, quipping to thunderous applause that God agreed with his opposition to gay marriage, there wasn't a peep from Sean Hannity. Go figure.