Denial From Day One 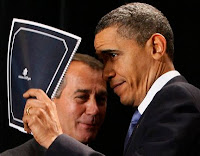 Karl Rove's talking point for Republicans is to treat Barack Obama respectfully to woo millions who voted for him in 2008. That requires a new narrative in which Republicans treated him respectfully when he was elected. But who can deny the truth of this New York Times editorial this morning?:

Mitt Romney wrapped the most important speech of his life, for Thursday night’s session of his convention, around an extraordinary reinvention of history — that his party rallied behind President Obama when he won in 2008, hoping that he would succeed. “That president was not the choice of our party,” he said. “We are a good and generous people who are united by so much more than divides us.”

The truth, rarely heard this week in Tampa, Fla., is that the Republicans charted a course of denial and obstruction from the day Mr. Obama was inaugurated, determined to deny him a second term by denying him any achievement, no matter the cost to the economy or American security — even if it meant holding the nation’s credit rating hostage to a narrow partisan agenda.