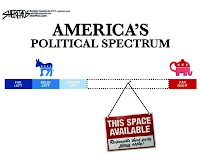 Juliet Lapidos on the one-time mainline Republicans who became odd ducks when their party and conservative evangelical Christianity converged sometime during the post-Watergate wilderness. For instance:

Kellie Ferguson, the executive director of Republican Majority for Choice, would like to see the GOP shift from banning abortion to finding common ground in order to reduce the number of abortions. She’s been dismayed by recent GOP attacks on family planning (the attempts to defund Planned Parenthood, for instance), which she finds irrational. “If you make it more difficult for women to access planning services, you end up with more unintended pregnancies and more abortions, which ends up costing taxpayers money. So, among other problems, it’s not fiscally conservative.” (The Guttmacher Institute estimates that every dollar spent on family planning saves taxpayers $4.)