A House Divided (And Not Beelzebub's) 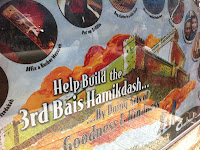 Covering this week's Christians United for Israel rally in Washington, D.C., Natasha Mozgovaya gets to the nub of the matter thanks to one of the speakers, Rabbi Shmuley Boteach, who's running for Congress in New Jersey:

Boteach [discussed] the notion that such Christians are interested in Israel only to bring about the second coming of the messiah. "Judaism is clear that action is more important than intention, it's not motivation that matters. I also don't buy it that Christians love for Israel is a pre-condition for the return of Christ. I do believe it's sincere. I think it's based on a true desire to connect to the origins of Christianity,” said Boteach.

While their love is undoubtedly sincere, I don't think there's any question that the main source of conservative evangelicals' relatively new-found passion for Israel's security is what they think the Book of Revelation foretells about Jesus Christ's return at the end of days. In pursuit of their vision, some have made common cause with ultra-Orthodox Jews in Israel who are planning to rebuild the Jewish temple -- on the Temple Mount, that is. You can make a contribution to the non-profit organization in Jerusalem that is already manufacturing the furnishing and fixtures. Of course there's the small complication that bu 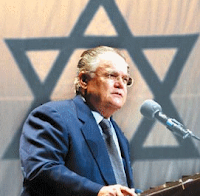 ilding the Third Temple would require the destruction of two medieval installations to which the world's Muslims are considerably attached, the al-Aqsa mosque and Dome of the Rock, as well as the recommencement of ritual animal sacrifices by temple priests. These Jews are trying to set the stage for the return of the Messiah, too, though they don't think he'll look like Jesus, much as the Rev. John Hagee (who also spoke at the conference this week) may hope and pray otherwise.

The motive behind these Christians' devotion to Israel makes no sense to me, because I don't read the Revelation to John the way they do. Its author was an authority on the tyranny of late first-century Rome, not the geopolitics of the 21st century Middle East. Besides, 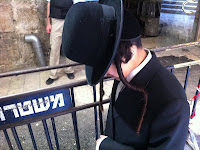 it strikes me as the height of pride for a pastor, rabbi, or theologian to think that the LORD is going to bring all things to completion in our particular lifetime. It reminds me of believers in reincarnation who naturally prefer the idea that they were someone such as Cleopatra rather than a slave who died one afternoon while chiseling a stone for the pyramids. Nothing like putting yourself and your generation at the climax of the whole story of the universe.

While these Christians are entitled to their interpretation of Holy Scripture, which places Israel at center stage for the end of days, I wonder how much Christian compassion they have for Palestinians who have been living under military occupation on the West Bank since 1967. This population includes Christians whose perspective on Israel differs dramatically from Pastor Hagee's. Those we St. John's pilgrims met on our recent visit to Israel and the West Bank reminded us that Palestinians have been worshiping Christ longer than than anyone -- since the first Pentecost, they like to say, when the Holy Spirit anointed the faithful from all over the region as they gathered in Jerusalem. Scriptural int 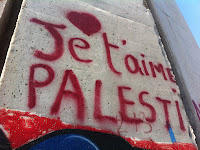 erpretation aside, their two-millennial perspective helps them resist the idea that all things are coming to a head next year or next Tuesday.

Unfortunately, as theological lines are being drawn, so too are political ones. In the mainline denominations, a reflexive tendency to blame Israel is taking hold, in part the result of go-slow policies of the Netanyahu government when it comes to the peace process. Our conservative brothers and sisters seem to be reflexively opposed to the Palestinian perspective. That's not good for anyone. As in all situations where people of faith have the opportunity and indeed are commanded to make the world better, guess who wins when the body of Christ is working against itself to the almost comical extent on display in the Middle East. For extra credit, where did Abraham Lincoln get the idea for his "house divided" speech?
By Fr. John at 8:35 AM