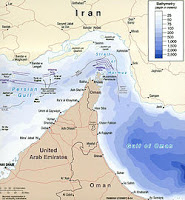 The New York Times on what is likely to happen if Iran tries to blockade the Strait of Hormuz:

Estimates by naval analysts of how long it could take for American forces to reopen the strait range from a day to several months, but the consensus is that while Iran’s naval forces could inflict damage, they would ultimately be destroyed.

“Their surface fleet would be at the bottom of the ocean, but they could score a lucky hit,” said Michael Connell, the director of the Iranian studies program at the Center for Naval Analysis, a research organization for the Navy and Marine Corps. “An antiship cruise missile could disable a carrier.”