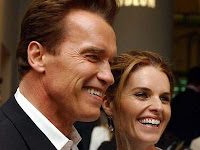 How did Arnold Schwarzenegger choose a political party? Richard Nixon (who would've been 99 today) was the one:

I heard Nixon speak [during the 1968 campaign]. He was talking about free enterprise, getting government off your back, lowering taxes and strengthening the military. Listening to Nixon speak sounded more like a breath of fresh air. I said to my friend, "What party is he?" My friend said, "He's a Republican." I said, "Then I am a Republican!”

They met for the first time at the Nixon library in November 1991, after the future governor of California arrived by chopper from a movie set to attend a reception in 37's honor. As library director, I introduced them, not that they didn't recognize one other already. I was on a flight with Nixon in the 1980s when he ran into Maria Shriver and huddled with her for 20 minutes, sharing stories about politics and their respective political clans (this was before she married Schwarzenegger, with whom, it's rumored, she may be reconciling). I also met Bruce Springsteen because of Nixon, but that's another story.
By Fr. John at 8:55 PM