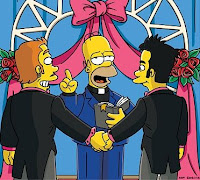 On Thursday a group of conservative religious leaders, including New York's Roman Catholic archbishop, Methodists, Lutherans, Southern Baptists, and the former Episcopal bishop who is now "archbishop" of the "Anglican Church in North America," published an open letter against gay marriage. They warn the like-minded that the government will try to make them knuckle under, not by forcing them to perform marriage ceremonies for gays and lesbians, which the signatories consider unlikely, but by punishing churches that deny benefits to gay couples, state-licensed adoption agencies that won't place children with the same-gender married, and state-accredited marital counselors who won't provide services to them.

Fred Clark, a Baptist Gen X blogger, doesn't just worry about how this kind of message from Christian institutions alienates gays and lesbians. He's afraid that eventually, it will alienate everybody. He writes:

Public statements like this exist only to take sides, draw lines and build walls. This letter serves no prophetic or pastoral purpose. But it is — unintentionally — useful and helpful for identifying the dead-enders determined to make exclusion and condemnation the hallmarks of their communities.

This pronouncement is an explicit “Unwelcome” sign hung on all of their churches.... [T]hat cramped inhospitality applies not just to the GLBT folks they’re demonizing here, but to “all Americans who dare to differ” with the letter’s signatories.

So in a sense what these signatories have just done is they have turned to nearly every American born since, say, Thriller came out*, pointed a long crooked finger and declared, “We don’t want your kind in our congregations.”