Nixon Invented The Internet AND Birtherism? 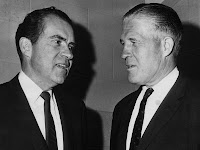 Mitt's father -- Governor George Romney of Michigan -- was driven to distraction by his own "birther" movement when he ran in the Republican presidential primaries of 1968. Supporters of his opponent, Richard Nixon, argued that George Romney's presidency would be unconstitutional because Romney had been born in Mexico where his grandfather and five wives had fled to evade America's polygamy laws.