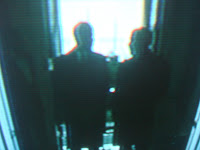 The White House press office this morning sent around a readout of the President's call with Turkish Prime Minister Recep Tayyip. These emails are usually pretty perfunctory, relaying how the president hopes to continue the two countries' ongoing efforts to promote economic growth and monitor some issue of regional importance (in this case Libya). However: "They underscored their shared commitment to the goal of helping provide the Libyan people an opportunity to transform their country, by installing a democratic system that respects the people's will," it reads. Democracy through military action? Didn't the president sort of campaign against that? Somewhere George W. Bush is wearing sweatpants, watching The Sandlot, eating Bugles and chuckling to himself.