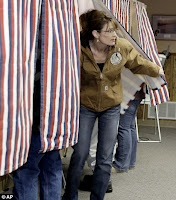 Dan Quayle's ex-chief of staff brought Sarah Palin to the dance in 2008 and then split. Now who's going to take her home?:

Even founder of the conservative "Weekly Standard" magazine Bill Kristol, who helped push Palin into the spotlight in 2007, said this week he does not think she should be the GOP standard-bearer.