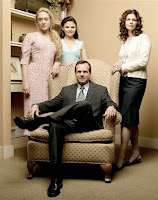 A regular visitor to St. John's is married to a bishop who retired several years from the Anglican church in Canada. When she was introduced in church Sunday morning, she said that she'd sometimes been called the "mama bishop." So I bent my head and asked for her blessing, which she graciously -- in the Christian sense of that adverb -- provided.

It wasn't an especially remarkable moment except for our denomination's adherence to the ancient tradition in which the act of sacramental blessing, along with the celebration of Holy Eucharist and the granting of absolution, is usually reserved to ordained people -- deacons, priests, and bishops. Even within the Holy Orders, the blessings usually flow from the top down. Deacons and priests in the Episcopal Diocese of Los Angeles are sometimes discomfited, if only briefly, when our bishop, J. Jon Bruno, asks us to reach up to his broad, 6'4"-tall forehead and bless him. The mama bishop on Sunday also looked a little surprised by my request, but she gave me a good one anyway. All of us baptized, after all, are priests of the most high God.

Something similar happened on Sunday evening, during the series-ending episode of HBO's "Big Love," the unlikely hit drama about a polygamist businessman and politician, Bill Henrickson (Bill Paxton). He's just taken three rounds in the chest from an angry monogamist neighbor in front of his house in Salt Lake City. His three wives hover over him in horror, watching him die. He looks at his first wife, Barb (Jeanne Tripplehorn), and says weakly, "I need your blessing." She hesitates, and then complies.

It was a moment of sheer beauty and the last thing I expected in this completely weirded-out show which started in 2006 as an broad parody of plural marriage and ended up witnessing for women's ordination and being a little squishy on polygamy.

Much of the tension in the fifth and final season resulted from Barb's discerning that she has the priesthood, which in the Church of Jesus Christ of Latter Day Saints is reserved for men. Henrickson is following what he takes to be his destiny to advocate for "the principle," polygamy, by founding a polygamist LDS offshoot and getting himself elected to the Utah legislature to try to legalize plural marriage. Meanwhile Barb risks tearing her family apart by attending a Mormon-like church which, unlike her husband, recognizes the sacramental equality of women. Ultimately she doesn't join it, for the sake of the unity among her, Henrickson, and her two sister wives. By this time, we've been deftly manipulated into feeling relieved when she puts family about principle, even though it's a plural family, and we all know that polygamy is disgusting.

HBO also got us to root for Tony Soprano, the murdering narcissist. Appreciating the nobility "Big Love" drapes over Henrickson in its final reels doesn't mean viewers have been transformed into advocates of polygamy. But I did get the feeling that series creators Mark V. Olsen and Will Scheffer had on their agendas persuading us to be less judgmental about lifestyles we don't fully understand and more mindful of the way most denominations and faiths fail to empower women.
By Fr. John at 10:10 PM