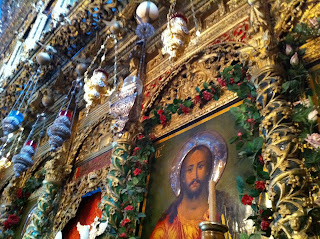 Hey, preachers! You might consider hanging some ostrich eggs in front of the pulpit, as in one of the ornately decorated Greek Orthodox chapels in the Church of the Holy Sepulcher. We St. John's pilgrims learned from the man in charge that ostriches don't incubate their eggs after laying them. Instead, they watch over them from a certain distance. Accordingly it's thought that ostrich eggs hanging in front of the iconostatis compel the congregation's attentiveness to the preacher.

More modern knowledge about ostriches is considerably more harrowing if also, perhaps, still ecclesiastically helpful. Ostriches do incubate their eggs, though in communal nests, with females (after removing the eggs left by weaker females) sitting on them during the day and males doing the honors at night. So it actually sounds like another good argument for women's ordination.

Ostriches also don't stick their heads in the sand. Nor could we pilgrims this morning, after we had begun our day with breakfast (plentiful pita and humus!) and morning prayer. Our guide, Canon Iyad Qumri, asked each of us to say what we'd left behind and what we hoped to take home from the Holy Land. Some moving stories were told and tears shed. One pilgrim worried about a chronically ill relative. Another said she'd come because this time last year, she collapsed in her

home, where she might've died if an attentive church friend hadn't checked up on her.

Shared stories and experiences are already helping our pilgrims, who come not just from California but Iowa (pilgrim Debbie) and Florida (pilgrims Carl and Virginia)

, bec0me a family -- or at least a highly mobile new congregation. Just today we explored a first-century excavation beneath the Damascus Gate, worked our way through the Muslim Quarter, heard the Book of Acts read out by an Ethiopian priest, lunched at a Lutheran guest house on a sturdy meal of schnitzl, potatoes, and beans (our last meal without humus for the next ten days), left our pra

yers in the Western Wall, caught a glimpse of the the latest Israeli demolition project roiling the politics of east Jerusalem, said evening prayer in the chapel of historic St. George's Cathedral, and heard a young Nazareth-born Arab-Palestinian-Israeli priest, the Rev. Canon Hosam Naoum, talk about his four-square identity and the challenges of being one of 170,000 Christians left in Israel and the West Bank.

So much more to say about our first day of pilgrimage, and so many extraordinary days to come. The happy obligation of leading compline in a few moments and the lead weight of jet lag tugging on my eyelids prevent my writing more -- except to add that my wife, Kathy, has once again been transfigured by the Holy Land.
By Fr. John at 8:42 AM