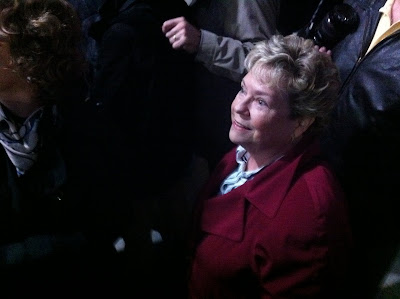 Visiting Bethlehem from Jerusalem means that pilgrims see beautiful and ugly things the same day -- the face of pilgrim Loreen beholding the sights in the Church of the Nativity, for instance, and the forbidding face of the Israeli security and separation wall hemming in the city of David. 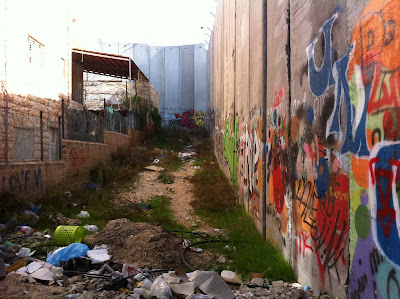 It's been an even busier day than we expected, the result of pilgrim Pam slipping on a sidewalk this morning and suffering a small fracture in her left tibia. Treated by doctors in Bethlehem and Jerusalem, Pam was back among us at St. George's by dinnertime, with a bright red cast (she picked it to match her toenails). The good news is that she'll still head to Nazareth with us tomorrow. 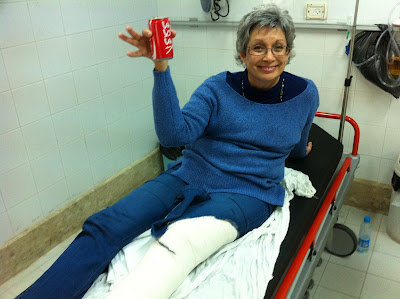 Pam's accident notwithstanding (we give thanks it wasn't worse), a day in the Middle East is full enough if it encompasses the birth and death of Christ. We reached the Church of the Nativity early enough that, thanks to one of Canon Iyad Qumri's famous and ubiquitous cousins, each pilgrim was able to visit the grotto where the church believes Jesus was born. 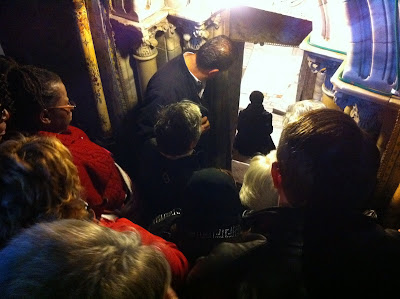 Iyad could only accomplish this by asking us to crowd onto the steps leading to the grotto and wait for a young man who was purposely blocking the way to decide to let us through. He was protecting the prerogatives of the Greek Orthodox priest who was celebrating mass in this, the heart of the Church. The Armenian Orthodox were planning a service immediately afterward, so Iyad wedged the pilgrims through the tiny space in under five minutes. From the other side, we watched the Armenians get under way. 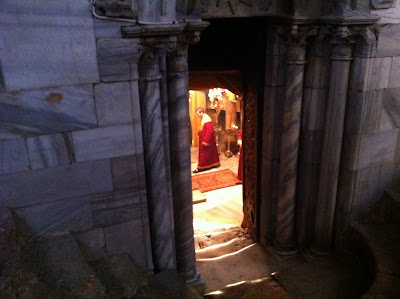 Then we went to the nearby St. Joseph chapel, read from Luke's birth account, and sang "O Come all Ye Faithful." After taking care of Pam, we returned to Jerusalem and Easter: A glimpse at the magnificent model of Second Temple Jerusalem at the newly renovated Israel Museum, which shows, experts believe, an exhausted rock quarry that was used both for Mt. Calvary and Jesus's burial and which became the site of his resurrection. Here a pilgrim points at the spot. 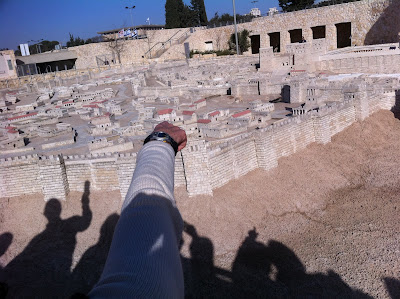