They Followed His Money 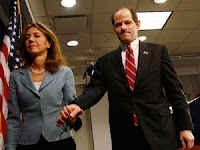 Catching up on podcasts of NPR's "Fresh Air," I just listened to Dave Davies' Nov. 4 interview with Alex Gibney. He's made a documentary about former New York Gov. Elliot Spitzer, who resigned in 2008 after the news broke that he'd been visiting prostitutes.

Gibney wonders why the Bush administration went after Spitzer but not Washington figures who were involved with prostitutes. He also speculates about whether those whom Spitzer had targeted when he was New York attorney general, such as former AIG chairman and CEO Hank Greenberg, may have played a role in his demise. Spitzer blames no one but himself.

The conversation reminded me of a post I wrote for the Nixon foundation's bog on March 3, 2008. I wasn't sticking up for Spitzer. I guess I was in a libertarian sort of mood:

“Why was that the headline?” my attorney friend (with a journalism background) asked. “Were they saying he was involved in running the prostitution ring?” My friend said it should’ve been:

That would’ve sounded different as the scandal broke — less ominously legal-sounding, more rooted in personal ethics and morality. My friend’s version would’ve gotten the story right the first time. Most people’s judgments about Spitzer come from what they think about a married man having sex with someone else. Of course the narrative behind the first headline, the real headline, was rooted in the way the governor’s activities caught the eye of investigators, as reported this morning by the New York Times (emphasis added in boldface type):

As part of the “know your customer” requirements, banks must assess their clients’ financial patterns and set guidelines to ensure that an alarm is sounded if there are unusual transactions, said Bob Serino, a former deputy chief counsel at the Office of the Comptroller of the Currency who now advises banks and individuals on anti-money laundering regulations. “The idea is that if somehow a customer who usually deposits $3,000 a week starts depositing $300,000 into his account daily, that would be kicked out and looked at,” Mr. Serino said. “Banks could certainly decide that a politician’s risk rate is higher and thus have a higher level of due diligence set for someone like Spitzer.” In addition, banks must exercise an extra level of due diligence for a “politically exposed person.” While the law defines such people as “current or former foreign political figures, their immediate family and their close associates,” several banking officials at major institutions said that as a matter of practice, they extend extra scrutiny to American political figures. The July Suspicious Activity Report by North Fork that flagged Mr. Spitzer’s transactions picked up three wire transfers totaling roughly $10,000 to QAT International, in what appeared to the bank as a possible attempt to avoid a separate legal requirement that banks notify the Treasury Department of transactions of $10,000 or more, officials involved with the case have said. The requirement to report such large transactions applies only to currency transactions — “the coin and paper money of the United States” — not to wire transactions of the sort that Mr. Spitzer allegedly made, Mr. Serino said. Once a bank determines that a transaction is suspicious, it is obligated to file a Suspicious Activity Report with FinCEN, the Financial Crimes Enforcement Network, a division of the Treasury Department. The standard for filing such reports has diminished since 9/11, with banks erring on the side of caution out of fear that the government will later second-guess its decisions, experts said. The Suspicious Activity Report filed by Mr. Spitzer’s bank was one of hundreds of thousands filed annually, and three people with knowledge of the investigation said it did not immediately attract the attention of federal investigators. But when HSBC filed its report on the shell companies, the I.R.S. began an inquiry. A former director of FinCEN, who now works in the industry at a company whose policies prohibit speaking on the record, said that since 9/11, suspicious activity reports had increasingly been used as a source of tips for law enforcement.

Sorry for the long quote. Let’s make sure I’m reading this right. A U.S. citizen legally moves around a sum of his own money sufficient for a decent down payment on a Dodge Neon. Bankers, who evidently have the right to decide for themselves who is prominent enough for special scrutiny (not just politicians but their family members and friends — heck, maybe the town planning commissioner who turned down the variance for their family room last month), alert the Treasury Department.

Post-Sept. 11 anxiety gives the bankers additional warrant, notwithstanding the relative unlikelihood of elected officials funding terror cells. The higher rate of reports by Mr. and Mrs. Nosy Parker at your local bank has been giving investigators plenty of non-national security stuff to get their teeth into. Spitzer would still be governor if our friends at Homeland, I mean Internal, Revenue hadn’t found his “suspicious activity report” at the bottom of someone’s in-box.

My lawyer friend points out that it’s still legal to deposit and withdraw cash that belongs to you. We all understand that many large cash transactions are suspicious. Also, sometimes a guy gets a few grand out of the bank to give another guy for a pickup. They’d better keep an eye out for the feds. Our libertarian brothers and sisters, noting the pivotal role played by the IRS in the New York scandal, might have written this headline: