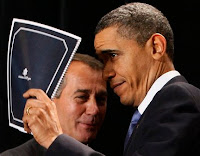 Ask most Washington observers who the obstructionists will be over the next two years, and they're likely to say congressional Republicans. But in a Nov. 3 interview with Terry Gross on "Fresh Air," veteran political writer Todd Purdum tells a somewhat different story. He describes the incoming GOP speaker, John Boehner, as likable and willing to work with Democrats, the kind of guy you'd like to have a beer with. His relationship with the tea party crowd is, in Purdum's word, correct. He's not interested in radically reforming government. He is interested in creating jobs and getting spending under control.

The problem, Purdum said, may end up being the president's worldview:

Certainly John Boehner and Barack Obama do not have the kind of personal reality and experience in common that you could say Newt Gingrich and Bill Clinton had [after Republicans took control of Congress in 1995]. There was a level at which Bill Clinton and Newt Gingrich were able to take the measure of each other as wonky, super-political Southern guys of a comparable generation, and I think they each felt they had the other's number and could somehow understand each other. I don't think there's much in Barack Obama's life experience or worldview that would make him a natural, give him natural affinities with John Boehner. So it'll be really interesting to see how they are able to work together.

I’m not so sure that even the Gingrich Clinton bond would result in progress these days. Much has changed since Clinton and Gingrich talked budget issues. It matters less how individual leaders and officials relate to each other than how ordinary Americans relate to each other. The most vocal (not necessarily a majority) send a message “if you’re not *just* like me, I hate you.”

To judge by message board rhetoric, some Americans would prefer a one-party state (theirs), much like in the Soviet Union, with opposing parties pulverized to near extinction. Of course, this is couched in terms of patriotism and belief in traditional values (on the right) or communitarian objectives (on the left), instead of praise for one party rule. But as someone (was it David Brooks?) recently asked, how can you love your country if you hate half its citizenry? That people on the right such as Kathleen Parker counter Fox News by reminding us that most Americans are moderate in temperament and center-right and center-left in thinking is useful.

But it is the most passionate among the voters who drive issues these days. For some, compromise has become a dirty word. As Sen. Christopher Dodd noted yesterday in his farewell speech, politics now "rewards only passion and independence, not deliberation and compromise." In a speech which resulted in Mitch McConnell embracing him and calling it the most important speech in the history of the Senate, Dodd said, “Intense partisan polarization has raised the stakes in every debate and on every vote, making it difficult to lose with grace and nearly impossible to compromise without cost. Americans' distrust of politicians provides compelling incentives for senators to distrust each other, to disparage this very institution and disengage from the policy making process.''

It was interesting to see in Jonathan Alter’s book (The Promise) that Obama and Rupert Murdoch have a cordial relationship and that Murdoch had planned to endorse Obama in 2008. Alter writes that Murdoch “openly admired Obama.” Roger Ailes threatened to resign (!) and Murdoch backed off. After trying some outreach to Fox, Obama largely gave up after too many of its opinion personalities threw out smears and lies about him. I wouldn’t have used administration figures, such as Anita Dunn, to belittle Fox. Alter suggests outside surrogates would have done bettter. I would have tried appealing to Americans’ better natures. Hard to do, however, when the reasons for the seeming self absorption and need to be identified as “good” not for intrinsic worth or based on one’s actions, but *through oppositional framing and at the expense of others* have deep roots, perhaps in the home for some.

Alter noted, “Obama prided himself on respecting the intelligence of the voters. . . he hadn’t treated Americans like children in the 2008 campaign and he wasn’t about to start now.” The real challenge for Obama is how to alter his instinctive reaction of talking to Americans like adults and to connect through barriers on his side and theirs. Alter notes, “The president’s assumption about the intelligence and common sense of his audience was optimistic, even Pollyannaish.” I think it stemed from his prior ability to talk to and relate to people of ideologies different than his, going back to his good relations with conservatives in his Harvard Law Review days. What he didn’t count on, and what is a factor more than how he and other officials relate to each other, was how much the cable/talk radio type of conservative depends on delegitimizing anyone unlike him or herself. It wasn’t yet so in Gingrich’s day although it started back then. Some of Obama’s other communications problems are structural, not all are self inflicted. One political scientist recently mused about issues such as health care and seniors, "It is said that with age comes wisdom. More typically it is a sense of vulnerability and need for deference as a validation of the contributions of their working years."

Shorter version, in analogy form: If Obama is NARA represented by MK (and I am like him in temperament although we have some differences), and the opposition is the Nixon Foundation represented by John Taylor, we could try to work things out on Nixon library archival access and museum and exhibit matters, regardless of our individual temperaments. It is enough that we respect the process and the fact that there are different ways to look at things.

The two of us accepting that also depends, however, on who is behind us. If the Nixon Foundation that Taylor represents accepts certain principles related to archival principles and professionalism and the NARA represented by MK listens to where the family is coming from, chances are the two sides could work out agreements over difficult issues. If the Foundation instead is largely responsive to aging former Nixon associates, including ones who were around during Watergate, and who give off a vibe of seeking validation of their path in life, then not only is working things out with a MK NARA more challenging for the two sides, but Taylor might find himself out of a job.

That's why I focus so much on the voters behind the parties, not just on the leaders in Washington. While Obama came in to office through a coalition that included Democrats and Independents, liberals and moderates, some of whom want the parties to compromise, the leaders of the other party increasingly represent a much more monolithic group of voters, the most vocal of whom seem determined to allow no compromises or even to demand demonization of others so as to validate their life path and choices.

Dunno, MK. You may be playing chess while I'm plugging away at checkers. But my impression is that Fox News represents the POV of about 25% of the electorate. With every president, there's, what?, 30% who are against him no matter what. It was inevitable that someone would figure out how to capture that market share for a cable news show. But what if Obama never talked about it? What if administration people never appeared on it? I'm not suggesting they shouldn't. But who'd be mad, exactly? A bunch of people who'd never vote for Obama in a million years. So I don't get why they've earned such a big symbolic foot print.

As for Obama's critics in general, I still think his vulnerability is a combination of unemployment and his temperamental inability to connect with people at the point of their pain and anxiety. If Clinton were president, would he be as unpopular, and would Fox seem to be as large a factor? I doubt it.

Ironically, while I hardly ever look at Fox anymore, we've got Greta van Susteren on tonight. She just conducted an extremely cordial interview with a Democratic state senator from Utah, Luz Robles, who's endorsing a progressive approach to illegal immigration.

Well, I've spent 37 years working in a data driven environment so my dismay at the acceptance of smears and lying may derive from that. (Steve Benen at Washington Monthly recently wrote that Fox's business model is lying. Thst's an exaggeration from a progressive blogger, of course. But I 30 years ago, I would never have expected Americans, even the small percentage that now watch Fox, to embrace hosts who peddle some of the outrageous things they say on FNC. From the clips I've seen, I can understand why Rep. Inglis, who lost in the GOP primary this year, once told his booing audience to turn off Fox.

Fred Graboske used to tell me, "you're ever the idealist, Maarja." That was 25-30 years ago. I think there's still a part of that that affects how I look at things. I have a strong dislike of bullying, intimidation, and smears.

As to Clinton, I think he would be pilloried by Fox's opinion side now as well. They would be laughing at his empathy and claiming it was false. That Roger Ailes, a pitiable man in my view, thinks Obama is a radical who represents a great danger to America (as he has said) is in my view ridiculous.

Unfortunately, FNC's footprint seems larger than one might expect. Andrew Sullivan has a great comment in a piece from this morning about Nicole Wallace and her belief that Palin will be exposed if left alone. Sullivan quotes Wallace's lightly praising comments about Hannity and Limbaugh and then wonders if she means it: "Sometimes on the right, it sounds like you're reading minor functionaries in the North Korean bureaucracy.)" Or as liberal bloggers point out, pushback lightly from the right against Limbaugh and you can expect a retraction and apology to Rush in "three, two, one. . . ." Meh. For those that feel compelled to do that, and I see them quoted from time to time, I can only say, "wouldn't wanna be ya." Way too independent for that!

See this op ed by William A. Galston and David Frum in today's Washington Post on their perceptions of hyperpartisanship, gridlock and the members of the public who may form a (new Silent Majority?) "no labels" movement.