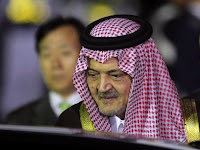 I'll leave aside the inappropriateness of "an Australian journalist and Internet activist" deciding which classified documents pertaining to the security of my country should be made public. On this question, I trust Barack Obama a lot more than Julian Assange. I'll bet Obama's beginning to develop an appreciation of Richard Nixon's frustration over the Daniel Ellsberg's leak of the Pentagon Papers (which led to the Plumbers, which led to Watergate). I also appreciate the care the New York Times put into its decision to publish 100 of the leaked documents, some of them redacted at the request of the Obama administration.

Beyond the appalling fact of the leak itself, so far the biggest story seems to be this:

[T]he cables reveal how Iran’s ascent has unified Israel and many longtime Arab adversaries — notably the Saudis — in a common cause. Publicly, these Arab states held their tongues, for fear of a domestic uproar and the retributions of a powerful neighbor. Privately, they clamored for strong action — by someone else.

King Abdullah of Saudi Arabia...according to another cable repeatedly implored Washington to “cut off the head of the snake” while there was still time.

The king is shown here. Other Arab leaders concur with his view.

The sheiks rarely utter a public criticism of Iran and yet privately urge the U.S. and Israel to start a war that could end up making Iraq and Afghanistan look like sideshows. What's the basis of these warmongers' inauthentic public solidarity with Tehran? They're Arabs and the Iranians, Persians, so they're not bound by ethnicity. Both Saudi Arabia and Iran are tyrannies that practice apartheid against women, but that's probably not it. Within Islam, Sunni and Shiites are rivals, which could be part of the reason the sheiks want the mullahs snuffed. But they'd never have said so openly, because far more important is their ostensible mutual hatred of Israel -- which, these documents make clear, the Saudis actually hate somewhat less than they hate Iran.

So what's the right U.S. policy? It's certainly not fighting a war for the sake of the Saudis' interests or regional standing, oil or no oil. Do we go to war preemptively to stop the Iranian nuclear program for our own or Israel's sake, as Lindsey Graham and others have advocated? Only if we think the Iranians are lunatics who would invite the obliteration of their civilization by using their bomb, against Israel or any other U.S. ally or interest. But if the Tehran leaders are rational like everyone else in the world, then they can be influenced, bought, and if necessary deterred. That should be the basis of U.S. policy, just as in the Cold War, when the Soviet Union threatened our interests far more than Iran does.

As for whether Israel launches a strike, is it too naive to say that that's Israel's business?
By Fr. John at 5:14 PM