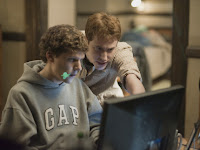 Facebook co-founder Mark Zuckerberg might not have really resented the cool kids at Harvard, but I'll bet the director and writer of "The Social Network," David Fincher and Aaron Sorkin, have some snob issues. Real Z denies being obsessed with getting into one of Harvard's social clubs. But members of the Porcellian, especially twin brothers Cameron and Tyler Winklevoss (both played by Armie Hammer), come off as pious fops right out of P. G. Wodehouse. A key scene occurs after the duo narrowly loses to a Dutch team at the Henley Rowing Regatta. At a reception afterward, the athletes are wearing sport coats with white piping and look like they're about to sing "He Is An Englishman." I'd guess the filmmakers chose the location mainly so they could flash "Henley-on-Thames" on the screen.

The brothers claim Zuckerberg got the Facebook idea from them (they got a massive settlement in real life) but hesitate to sue at first because it's not what Harvard men do. The real Winklevosses rowed for the U.S. in 2008 in Beijing. Did they deserve their portrayal? Does real Zuckerberg deserve being portrayed by Jesse Eisenberg as an angry, misogynist oddball? Was Napster co-founder and Facebook consultant Sean Parker (Justin Timberlake) really the devilish manipulator (in a San Francisco nightclub, his face is actually lit like a grinning jack-o'-lantern) who persuaded Zuckerberg to betray his best friend and founding CFO?

Sorkin, creator of "The West Wing" and writer of "Charlie Wilson's War," doesn't care. A good story, not accuracy, is the thing, he says. His dialog, including Eisenberg's byte-o-babble, is as dazzling as ever. Close your eyes when Zuckerberg's hectoring his girlfriend, and you can almost hear Mary Louse Parker telling Bradley Whitford, "Dating you is like dating a Stairmaster." The ending is poignant, but again, you don't know what it has to do with Zuckerberg and Facebook. What if your problem is that real Z, who after all is only 26, is nowhere near as interesting as 500 million members and $24 billion? Call Aaron Sorkin.
By Fr. John at 8:40 PM

Interesting issues (haven’t seen the movie yet, however). Riffing on the movie, Frank Rich wrote a column in yesterday’s NYT, “Facebook Politicians Are Not Your Friends.” It raised for me a question which historians and archivists alike will have to consider. Rich mentioned how many of the celebrities from the political and entertainment world who have Twitter and Facebook accounts do not write all their own tweets and postings. Savvy people know that already, of course.

In the days of paper based record keeping, as with Nixon’s records, we could see some of the back and forth between those making speeches and those (Safire, Andrews, Price, Buchanan) who drafted material for them. Each had his own style and approach, and RN selected whoever was most appropriate for the issue at hand. However, one can tell from the archival records that RN had major and significant input into his own speeches (as I believe Obama does, as well), writing and re-writing sections at times. Some presidential speechwriters have become quite famous (e.g., Peggy Noonan, author of Ronald Reagan’s eloquent remarks after the Challenger disaster).

To what extent will archivists and historians be able to trace who wrote what on celebrities Twitter and Facebook accounts? Not to any extent that I can tell, unless there is email traffic which shows how messages were crafted. Or if metadata reveals where a posting came from (whose ISP). How many assistants do politicians and celebrities such as Sarah Palin have for assistance with Twitter and Facebook? Assistants obviously serve the principal. But I have questions about them. How old are these people? What shapes their world view? To what extent are they permitted to push back against seeming miscalculations? To what extent do they flub chances to broaden the principal’s appeal, due to insularity or age?

It makes a difference whether those crafting the message all lean one way or are suited to appealing to a particular audience. Or have the means to reach different segments of the public, as RN’s speechwriters did. Political differences do not emanate only from ideological or policy positions. There are people who lean right or left to whom fearmongering and victimology (“look at what they are doing or will do!”) appeal greatly. And ones who are very turned off by that as signalling to the reader, "they personalize everything and panic so easily, perhaps they can't cope," leading to the conclusion, "don't trust them with your vote." It is very challenging to find a messaging approach that appeals to both types. More and more, it seems as if those crafting messages reach more for the former and largely miss out on appealing to the former.

Oops, forgot to add my usual disclaimer line that it is a federal holiday and I posted the above on personal time and not from work at 11:34 eastern time :-)

Huh, messed up my math. It was 10:34 eastern time, LOL. At any rate, a time when I normally would be at work on Monday but was not on this one.

This is a fascinating insight. Just think about it (which I'm only now doing, thanks to you): Throughout modern history, until this generation, we've been able in most instances to associate powerful people with the words they wrote. When (perhaps I should say if) Ted Sorensen's papers become available, we'll even be able to figure out which parts of Profiles in Courage are his and which JFK's, for instance. Even with MS Word, we can track whose computers made changes in word processed documents.

But in the on-line cloud, as you say, it will be almost impossible to know for sure.

Yesterday or Saturday, there was a toxic exchange about the Middle East on Yglesias's blog. Someone was alleging that someone else was posting in his or her name. The site administrator was desperately trying to get to the bottom of it -- seemingly! Because it occurred to me that the entire exchange could've been manufactured, either to disrupt the site or as some kind of a weird public art happening.

I'm getting too old for this!

Hahahaha, no, you're not getting too old for this! But it is one of the challenges archivists and historians will face. I've had some interesting convos recently with some peeps at NARA about related issues. :-)

BTW, I enjoyed reading about the retreat, sounds as if it went well! Ah, Saturday afternoon naps! They really can be a nice refresher. A short break and one is good to go, whether it is thinking or writing or raking leaves or shoveling snow or whatever!